On 14 and 15 January 2021, the DCU Brexit Institute hosted the fourth conference of the BRIDGE network event series, in collaboration with University of Bozen and Bolzano, the University of Copenhagen and the Central European University.

The conference “Migration and Differentiation in EU Law & Governance” took place online via Zoom. It was opened by the remarks of Federico Fabbrini (DCU Brexit Institute), principal investigator of BRIDGE and Director of the Brexit Institute, and kicked off with panel 1 “From the Migration Crisis to the New Migration Pact”. The first panel saw the participation of Leila Hadj-Abdou (University of Vienna & EUI Migration Policy Centre), Susan Rottmann (Özyeğin University), and Filippo Scuto (University of Milan). Then the second panel followed, on “Migration, Differentiation and a Europe of Variable Geometry”, chaired by Stefania Baroncelli (University of Bolzano). The speakers of the panel were Marta Pardavi (Hungarian Helsinki Committee) Lilian Tsourdi (University of Maastricht) and Renata Uitz (CEU).

Panel 1 kicked off with Leila Hadj-Abdou which described the features of a regulatory approach to migration and governance and focused on the pact on migration and asylum. Susan Rottman followed with a presentation on “The politics of belonging lens on the crisis-pact continuum”. In her talk she described the identity relationship between migrants and the countries where they live temporarily or for an indeterminate period, posing the question of their integration. Then Filippo Scuto continued, describing what he defined as the failure of the European response to migration in the new EU wide pact. He focused in particular on the return mechanism and on its inefficiencies, pointing in particular to the lack of agreements of cooperation with third countries.

Panel 2 was nicely introduced by Stefania Baroncelli who presented the speakers. The first was Marta Pardavi, who presented the violations of the relocation mechanism by several Member States, and in particular, the pushbacks operated by the Hungarian government, including giving hints on one of the latest relevant ECJ judgment. Then followed Lilian Tsourdi, who described again how several Member States suspended the Dublin rules in the last few years, and in particular during the pandemic, taking somehow advantage of the opportunity to reduce the cooperation between the EU Member States. The panel was concluded by Renata Uitz, who discussed the link between migration and the rule of law crisis, underlining how the migrant emergency is often exploited to target different policy objectives at national level. She also discussed in depth the recent judgments of the ECJ on relocations.

Panel 3 “Migration, Brexit & the Future of EU-UK Relations” was chaired by Dr Veronica Corcodel (DCU). Federico Fabbrini and Giovanni Zaccaroni presented how the relationship between the EU and the UK evolved during the negotiations and how the hopes of the EU for an ambitious post-Brexit relationship also with reference to free movement were only partially reflected. Orsolya Farkas discussed the post-Brexit situation of EU and UK citizens living and residing abroad, with a particular focus on their free movement rights. Jonathan Portes gave the UK perspective, proposing an analysis of the new UK immigration and mobility legislation, with the points-based system that takes into account the skills of the migrants.

Panel 4, “Citizenship, Migration and Populism”, was introduced by Renata Uitz. Athanasia Andriopoulou started the discussion, explaining how populism is the symptom of a deeper illness, thus there is the need find a cure via the reform of the system. Then Helle Krunke continued, describing the link between migration and populism. She concluded focusing on transnational solidarity in the EU. Bashir Otukoya continued explaining the Europeanization of national citizenship in the EU, looking in particular at the relationship between rights and responsibilities in EU citizenship. Lina Papadopoulou concluded the panel again with a presentation on populism, describing the influence and differences between right and left wing populism with regards to immigration.

The final High-Level Dialogue “Migration, Populism and the Future of Europe” concluded the conference, under the chair of Helle Krunke. Ambassador Ferdinando Nelli Feroci intervened first, tackling the issue of the pandemic reaction and praising the role of the European Commission, in particular securing vaccine for and on behalf of EU countries. Then he addressed the other challenge of our time, nationalism (in its pathological aspects), and described in depth how this is affecting the development of the construction of EU integration.

Then, Professor Maduro continued stressing the need to learn from what happened so far. He maintained that the crisis provoked by the pandemic requires political change. Managing the pandemic – he continued – is equally raising democratic issues, including at the interface between expertise and democratic accountability. As the pandemic has progressed, expertise has been challenged in the name of democratic accountability. The European Union, being the center of expertise, has been equally affected by this challenge. The pandemic, he concluded, has been crucial in fostering populism. For the EU to play a decisive role will be not in eroding national democracy but rather in bringing back democratic pluralism.

The High-Level dialogue was followed by a lively debate, that characterized also the various panels in this two days conference. 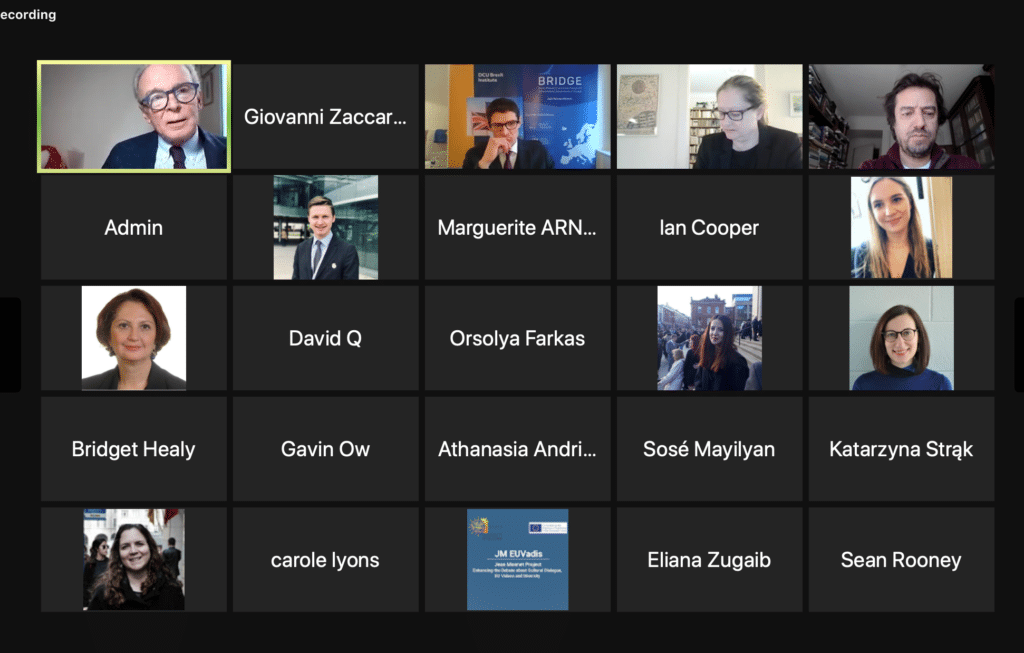