A Guide to the BRIDGE Network Interactive Maps

The BRIDGE Network has completed an Interactive Map project that is a visual guide to differentiated governance inside and outside the EU. The project consists of two maps: a map of Internal Differentiation, which shows the differences between the 27 EU member states; and a map of External Differentiation, which shows the differing relationships between the EU and the other 23 states in Europe. The maps also provide links to a series of in-depth Country Reports, one for every EU member state (and the UK, now a former member state).

A project of this kind requires making editorial choices. It is meant to be an educational tool, and thus should be relatively simple to use. Differentiation comes in many forms, and if a map were to include all of them it would have been exceedingly complex. The purpose of this brief guide is to explain the choices made in the conception and production of this project.

The purpose of the maps is to visually display the most important forms of differentiation that currently obtain among the sovereign states in Europe, both inside and outside the EU. Following this, the key question to ask is, which forms of differentiation are most important? These were in part chosen according to the research priorities of the BRIDGE Network, which focused on the EU’s response to four recent crises (Euro-crisis, Rule of Law Crisis, Brexit and Migration). Two of these, the Euro-crisis and the Rule of Law Crisis, are covered in the Internal Differentiation map, whereas Brexit and Migration are covered in the External Differentiation map.

The first category of Internal Differentiation is in Economic and Monetary Union (EMU). Here the most important variable is Eurozone membership: currently, 19 EU member states have adopted the common currency and 8 have not. Beyond this, the map identifies the three non-Eurozone states (Bulgaria, Croatia and Denmark) that shadow the ECB’s monetary policy within the Exchange Rate Mechanism II (ERM-II), and the two non-Eurozone states that have joined the Banking Union (Bulgaria and Croatia). These are the most salient forms of differentiation within EMU right now. Other forms of differentiation that arose from the Euro-crisis are not included because they are less salient. For example, the European Stability Mechanism (ESM), the bailout fund that was instrumental in managing the Euro-crisis, is not included because its membership is identical to that of the Eurozone, and so it is not an instance of geographical differentiation that can be displayed on a map. Similarly, the 2012 Treaty on Stability, Coordination and Growth (TSCG, aka the “Fiscal Compact”) was for a time a significant instance of differentiation, as there were three EU member states that were non-signatories (Croatia, Czechia, UK), but since then the first two have joined the TSCG and the third has left the EU, so there is no longer salient differentiation. By contrast, a new form of differentiation arose in 2020 when for the first time two non-Eurozone countries (Bulgaria and Croatia) joined not only ERM-II but also the Banking Union, and so this is highlighted on the map.

The second category of Internal Differentiation is in the field of Justice and the Rule of Law. This is controversial, because many scholars maintain that the Rule of Law is a fundamental value of the EU upon which its whole legal system depends, and therefore differentiation is impossible in this field. However, as a practical matter some differentiation does exist and is pointed out on the map: five of the EU-27 member states have thus far opted out of joining the European Public Prosecutor’s Office (EPPO), which investigates crimes against the EU budget, and two member states enjoy a broad opt-out in Justice and Home Affairs (Denmark and Ireland). In addition, the EU has established procedures for enhanced Rule of Law scrutiny of specific member states, including the Article 7 Procedure (thus far initiated for Hungary and Poland) and the Cooperation and Verification Mechanism (for Bulgaria and Romania when they joined in 2007).

Two more kinds of Internal Differentiation are identified on this map. One kind is ad hoc voluntary cooperation among member states in a manner that is authorized by the EU treaties, of which there are four instances: Permanent Structured Cooperation in Defence (PESCO) and three cases of “enhanced cooperation” in EU legislation. The other kind of differentiation is bottom-up cooperation among member states that form regional groups that are not institutionally connected with the EU. Drawing upon original research from the BRIDGE Network, the map identifies 14 different regional groups within the EU, including the brand new Franco-Italian cooperation plan set out in the Quirinale Treaty of 26 November 2021. These regional groups are forms of cooperation that reside at an intermediate level between the member state and the EU, and as such represent a form of internal differentiation within the EU that has gone largely unexplored.

The External Differentiation map presents a graphic illustration of the relations between the EU and the other sovereign states of Europe. The units of analysis on this map are the fifty sovereign states of Europe, and the maps reflect their internationally recognized boundaries, even though there are a few states that do not have de facto control of their entire territory. An inclusive definition of what constitutes “Europe” is employed, so as to include three south Caucasus states (Armenia, Azerbaijan, Georgia) and two states that are mainly in Asia but partly in Europe (Russia, Turkey). Moreover, an inclusive definition of what constitutes a sovereign state is employed so as to include one state that is not recognized by all EU member states (Kosovo) and four microstates (Andorra, Monaco, San Marino, Vatican City).

The map displays three broad categories of external differentiation, showing the various forms of economic integration, migration cooperation, and political association of the EU with the non-EU states of Europe. Within economic integration, it shows how various non-EU states are affiliated with the Single Market, the Customs Union, and the Euro currency; it is interesting to note that there is a different list of states in each case. Seven states outside the EU are partially integrated into the Single Market: these are the three non-EU European Economic Area (EEA) states (Iceland, Liechtenstein and Norway), Switzerland (through bilateral treaties), as well as – and this is less well known – three eastern states which have an Association Agreement with a Deep and Comprehensive Free Trade Area with the EU (Georgia, Moldova, and Ukraine). Four states outside the EU are partially integrated with the Customs Union – Andorra, Monaco, San Marino, and Turkey. And six states outside the EU use the Euro currency – four microstates which use it by agreement with the EU (Andorra, Monaco, San Marino and Vatican City) and two states that use it unilaterally (Kosovo and Montenegro). The final form of economic integration noted is the EU’s relationship with the post-Brexit UK, which is economically more distant than the states noted above, as the UK chose to leave the Single Market and the Customs Union.

In the map section on migration cooperation, it is noted that the Schengen area of passport-free travel is an instance of both internal and external differentiation, insofar as it excludes some EU member states and includes some non-EU states. Five EU member states, including Ireland, are outside of Schengen, whereas seven non-EU states are inside, four of which are full members (Iceland, Liechtenstein, Norway, and Switzerland) and three are de facto members (Monaco, San Marino, and Vatican City). The map notes that there is a separate bilateral Common Travel Area between Ireland and the UK, that is now an instance of external differentiation since the UK has left the EU. Finally, it is noted that the Dublin Regulation on Asylum, which establishes which state is responsible for the examination of an asylum application, is adhered to by all 27 EU member states and four non-EU states (Iceland, Liechtenstein, Norway, and Switzerland).

The final section of the External Differentiation map shows the most important forms of political association of the EU with other states in Europe. Six non-EU states in the Western Balkans have a Stabilization and Association Agreement with the EU that includes a free trade agreement and the prospect of EU membership. Four of these states are officially candidates to join the EU (Albania, Montenegro, North Macedonia and Serbia) while the other two are “potential candidates” (Bosnia and Herzegovina, Kosovo). (Turkey is also an official candidate for EU membership but accession talks have been stalled since 2016.) At a more distant remove are the six Eastern Partnership countries, although there is significant diversity within this group. As noted above, three of these countries (Georgia, Moldova, Ukraine) are closely associated with the EU’s Single Market whereas the others are more economically distant, and one of them – Belarus – is an international pariah that has suspended its Eastern Partnership activities.

We welcome you to explore our interactive maps and we hope you find them a useful tool to learn about internal and external differentiation in Europe.

BRIDGE (Brexit Research and Interchange on Differentiated Governance in Europe) is a three-year (2019-2022) Jean Monnet Network funded by the European Union’s Erasmus+ programme. 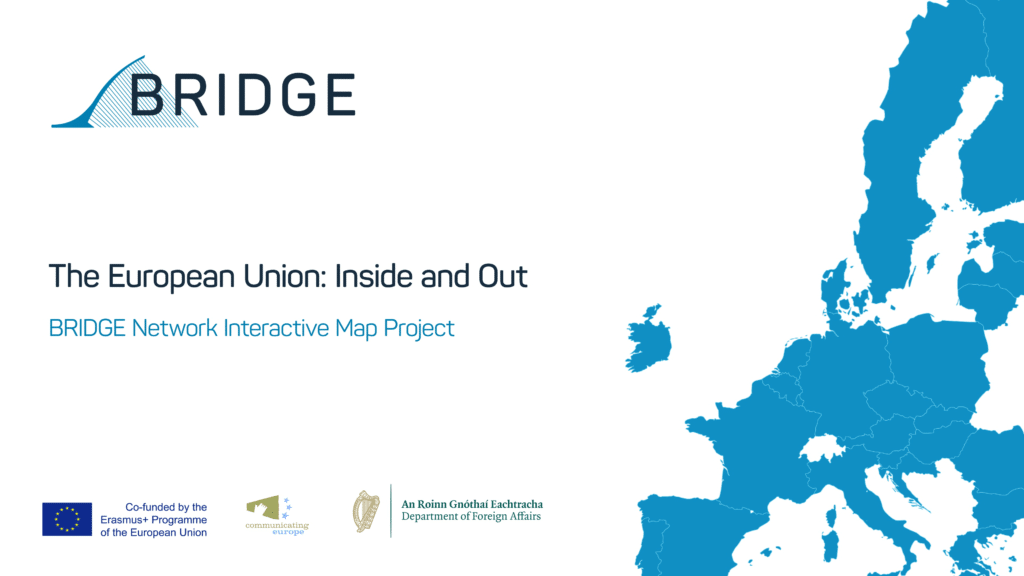