The Rule of Law After the State of the Union

In her first State of the Union address President von der Leyen took a strong stance on the rule of law, at least at first blush. Invoking the words of the EEC Commission’s first president, Walter Hallstein, she identified the rule of law as a founding value “in our Community of Law” (known as Rechtsgemeinschaft), while making a commitment to “rebuild the trust among us.” The speech then moved to confirm that “breaches of the rule of law cannot be tolerated” and also included a teaser for the Commission’s first rule of law report later in September (resulting from the process launched by the Commission in the spring of 2019).

At a time when there is ample evidence of systemic violations of the rule of law and other founding values in several member states, and the two Article 7(1) TEU procedures pending in the Council are in a vegetative state, many expected a robust stance from the Commission.

After all, for the past year the only advances happened in the CJEU, mostly — but not exclusively — in infringement cases brought by the Commission against Poland and Hungary. Against this background President von der Leyen’s promises of preventive measures to defend the rule of law and ensuring “no backsliding” sound too little too late.

So, it is well worth asking: what is the Commission committed to exactly?

Hallstein’s Legacy: The Rule of Law as an Ideal of Our Community of Law

President von der Leyen’s tribute to Walter Hallstein’s political genius together with the invocation of trust strongly resonates with a line of argument developed  by Professor Armin von Bogdandy in a recent article.

Recalling that Hallstein’s concept of Rechtsgemeinschaft is richer than mere “integration through law” (681), von Bogdandy argues that Hallstein’s concept is political in the sense that “it regulates by means of policies (today Article 26 ff TFEU), not, however, because it is a disputed object or forum of public debate. In other words: the community of law was set up for regulatory politics, not for politics that deal with crises that might tear apart the body politic.” (684) Von Bogdandy is concerned that as a narrow, legal concept, and especially in the manner as it is enforced by the CJEU, the rule of law is driving Europe apart (684). Thereupon he calls for recalibrating the concept of the rule of law through the positive force of trust, to the point of “change[ing] from concern about the effectiveness of Union law to mutual trust among institutions highlights the latest European transformation”(692, original emphasis). This switch of perspectives does not only allow, but requires pragmatically ignoring occasional violations of legal rules (694). Strengthened by trust the rule of law becomes a cohesive force: it restores confidence in “Europe’s self-understanding as a union of liberal democracies” (693), “the only transnational space close to Kantian peace and effective legal protection” (697-698). Somewhat counterintuitively, this requires European institutions to do less to safeguard the rule of law, and not more, in order to avoid antagonizing member states and citizens any further.

When placed in the framework of trust-building the rule of law ceases to serve as a legal safeguard against political, constitutional and legal practices that violate, mock or actively ridicule the founding values of the Union. Instead, it is transformed into a source of hope in times of crisis, a vessel for aspirations, as such it is placed on a pedestal as a political ideal — the symbol of a better future. As if to underscore this shift in the Commission’s overall approach, while President von der Leyen mentioned “ensur[ing] that money from our budget and NextGenerationEU is protected against any kind of fraud, corruption and conflict of interest,” the address did not reference budgetary conditionality at all.

Predictably, images of a better future came to a frontal clash in the parliamentary debate when Ryszard Legutko – the co-chair of the European Conservatives and Reformists (also professor of philosphy who is an intellectual architect of illiberal politics) – mobilized the founding value of democracy against the Commission’s latest vision of the rule of law. He accused the Commission of “brutal majoritarianism,” submitting that on account of defending the rule of law the “mainstream majority wants to crush every form of dissent” and that “European Institutions wants to switch off democratically constituted institutions of the nation states” (sic).

The day after the State of the Union address the European Parliament condemned the state of the rule of law in Poland detailing numerous violations with the forensic precision familiar from similar earlier resolutions. The 21 distinct grounds range from multiple guarantees of judicial independence, freedom of speech, assembly and association, as well as LGBT rights. “[I]n the light of overwhelming evidence” the Parliament called on the Council to resume formal hearings under Article 7(1) TEU, and “strongly recommends that the Council address concrete recommendations to Poland, as provided for in Article 7(1) TEU, as a follow‑up to the hearings, and that it indicate deadlines for the implementation of those recommendations” (para 65).

The Hungarian government was ready to offer its support to Poland, calling the resolution devoid of facts, adding in the spirit of grand ideals that: “The condemnation of Poland is a political stance, yet another attack of European liberals on Christian, conservative Poland.” As a gesture of gratitude, the Polish government appears to have backed up an earlier threat from PM Orbán to block the EU’s budget, complete with COVID recovery fund, over rule of law conditionality already in the Council.

The contrast between the Parliament’s forensic approach to safeguarding the rule of law by constitutional argument and the Commission’s emphasis on the inspirational ideal of the rule of law is best illustrated by the Commission’s mellow response to the ongoing Bulgarian constitutional crisis, complete with a juicy corruption scandal revolving around EU funds, months-long street demonstrations and a hasty constitutional amendment process launched by the Prime Minister Borissov that involves both judicial reform and reducing the parliament’s size considerably. On September 10, 2020 — a week before the state of the union address — Commissioner Jourova responded to harsh criticism in Parliament’s LIBE committee by saying that “If democracy does not work bottom-up and top-down, the Commission cannot do much if the things go too wrong in the member state … We have to bear in mind what the Commission is and isn’t.” (emphasis added)

In other words, a trust-based approach to the founding values works so long as things to do not go too wrong in a member state.

While placing the rule of law on the shelf of political ideals, the State of the Union address emphasized the need “to restore the four freedoms — in full and as fast as possible”, in order to build a world we want to live in. The four freedoms serve as the backbone of a set of ambitious policies, all requiring the commitment of considerable EU funds. This approach rooted in the fundamental freedoms is meant to recast community law as a trustworthy frame of regulatory politics in the European Rechtsgemeinschaft.

With putting its policy objectives in terms of the four fundamental freedoms, the Commission did not simply identify a sound footing for its bold policy proposals in the Treaties: it also marked the lines of legal contestation over the future of the Union.

This is a line which the Commission is used to holding, through infringement action.

Defending the fundamental freedoms is the classic way of making EU law work, and it may work fine in times when things do not go too wrong. Yet, if the German Constitutional Court’s judgment in Weiss from May 2020 is any indication, we live at a time when judicial intervention by the CJEU is not likely to trigger less animosity from domestic courts under ’traditional’ Union law than when acting in defense of the founding values.

A decade into European dialogues on the rule of law member states that are well versed in the art of hyperlegalism will not be intimidated by having to defend illiberal constitutional engineering in terms of the fundamental freedoms. In his radio interview on the week of the State of the Union address Prime Minister Viktor Orbán was eager to emphasize that Hungary’s COVID response will include a sealing of national borders, as the virus came from abroad.

This logic flies in the face of cooperative public health mechanisms outlined in the State of the Union two days before. Instead, it gives a taste of a future where the Commission and the CJEU end up defending the Union’s legal and practical essence — the fundamental freedoms — one case at a time. Instead of less legal contestation, this approach is likely to result in more frequent and more intense judicial scrutiny over the member states. Thus, the humble return to the ideal of regulatory politics framed by law is likely to result in the very legal — and judicial — battles that the trust-based reconceptualization of the rule of law was hoping to avoid.

Defending the rule of law by legal means has made the Commission the primary target of criticism from illiberal member states. The strategy that elevates the rule of law to the pedestal of ideals, and leaves the legal grunt work of defending the foundations of the European legal order to the fundamental freedoms will drag the CJEU into the crosshairs of gratuitous political attacks. Such attacks lead to questioning the primacy of European law, especially in cases where the CJEU acts early — possibly through interim measures requested by the Commission — to fend off the predictable future effects of judicial reforms (Case C-791/19 R, Commission v Poland) or calling out the chilling effect of transparency rules on fundamental freedoms and political rights (C‑78/18, Commission v Hungary). That this type of risk assessment was meant to be performed under Article 7(1) TEU by political actors is too trivial a point to elaborate any further at this point.

With putting up the CJEU to defend the fundamental freedoms in order to save the ideal of the rule of law, the Commission is engaging in a dangerous game at a time when the Conference on the Future of Europe is in search of agenda items, inter alia, on fundamental values, rights and freedoms. A decade into the EU’s rule of law conundrum such a conversation on fundamental values trigger demands for constitutionalizing those elements of the jurisprudence that may be central to the acquis, but are not expressed in the Treaties — such as the primacy of EU law.

If the current talks on budgetary conditionality are any indication, it is best not have a discussion on the Union’s fundamental values while things are going too wrong for the rule of law, human rights and democracy in several member states.

Renáta Uitz is Team Leader of the BRIDGE Network. She is chair of the Comparative Constitutional Law program at the Central European University. During the 2020-2021 academic year, she is a Distinguished Visiting Professor at University College London 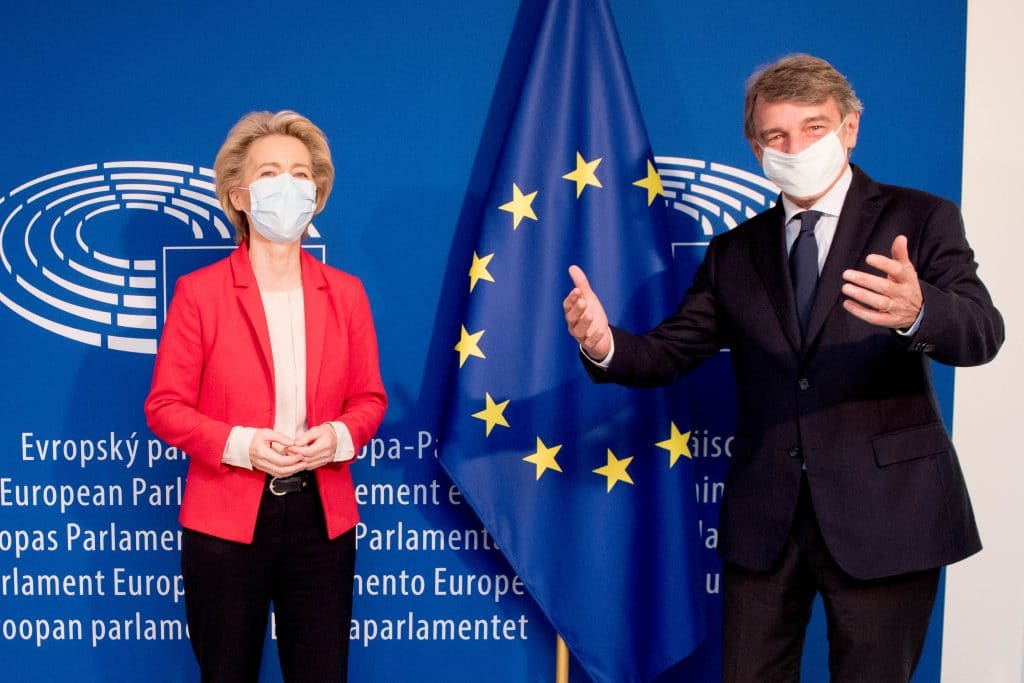