Financing the European Recovery: What do the New Developments Mean?

How to finance the recovery has been the major policy debate of recent weeks, and not only the outcome but also the discussion itself will influence economic and political developments for years to come. How much, for whom, and which instruments are of course the main points of contention.

The recent agreement between Germany and France on central aspects of the EU Recovery Plans came as a surprise to many, and is indeed a major change of policy for Germany, larger than most policy decisions during the Euro Crisis. Politically – for Germany – the most challenging one was on a Recovery Fund, which obviously influenced the proposals of the Commission on a European Recovery Fund, and associated changes to the Multiannual Financial Framework (MFF) decisions. The major policy breakthrough was the agreement of the German government to have a strong focus on grants instead of loans.

As opposed to this, the so-called frugal 4 (Netherlands, Austria, Denmark and Sweden) had put forward a paper that emphasized that the Recovery Fund should concentrate more on loans that recipient countries would eventually repay to the EU budget.

The choice of instrument matters enormously, and will influence economic developments over a decade. As the economic crisis started to unfold the ECB reacted swiftly and with the appropriate tools of monetary policy. This contained otherwise unmanageable developments in financing conditions of sovereigns. Maintaining the flow of credit to the economy in turn will depend on developments in the banking system, and so far the outlook is fairly stable. The European Investment Bank will, in addition, be able to provide large volume loans at very low interest rates to corporates, and large infrastructure projects. Recent agreements of Euro Area Finance Ministers have enabled the ESM to provide low interest rate loans to governments in case of need, up to 2% of respective GDP.

Given these available instruments even more loans are not what Europe needs. Consider the case of rehabilitating a hospital in northern Italy: do we want to provide them with a loan of 20 million Euro and tell them “the interest rate is really favorable, and you will have ten years to repay it”? Bringing our social and health infrastructures into the 21st century, making them more crisis resistant; greening our economies and incentivizing their digitalization; assisting regional development, so that employment can start picking up again on a broad basis: all these societal aims need to be supported by grants.

And this is the focus of the Commission’s proposals that are significantly closer to the French-German proposal, than to that of the “Frugal 4”. It is essentially a proposal in two parts, comprising a Recovery Instrument and a revised EU Budget (the MFF). The Recovery Fund should encompass 500 bn of grants, and 250 bn of loans for the period 2020/1 – 2024. The institutional breakthrough is the fact that the Commission should be enabled to raise these sums in markets, and repay them gradually between 2027 and 2058. Repayment is to be financed either through higher national contributions, or reduced policy support, or new own resources, such as digital taxation, a carbon border tax or other similar measures. This promises to be an interesting though protracted discussion. But in any case this is an economically intelligent way of helping all of us in the economic recovery as we slowly emerge from this crisis over the next years.

As national ratifications are needed, the aim is to be ready by the beginning of 2021. Some argue that this requires bridge solutions for those who are in need of funds already as of 2020. This will be one of the contentious points of discussions as a number of Member States are opposed to providing upfront bridging guarantees for that purpose. They are arguing that those in need of money can borrow from the ESM (or even the new SURE instrument).

Are there conditions associated with the funds? There is a link foreseen to the European Semester which should ensure that Member States respect the (reform and investment) recommendations addressed to them, while delivering on EU (climate and digital) priorities. These recommendations, the Country Specific Recommendations, are going to acquire a heightened policy and political dimension compared to the last two decades, where they were at best followed loosely. Indeed it appears that this is the best bet to ensure that the money is indeed spent intelligently in the various Member States – given the volumes involved this can develop into a major headache for the Commission.

The next and major step in the political battle for the right form and timing of support of recovery is the necessary political approval of Heads of State or Government. The Commission is hoping for a political agreement in July, but this seems optimistic. Even with an agreement in the summer this will constitute a necessary but not sufficient impetus for improving cooperation in the EU. The political atmosphere is charged on both sides of the divide, and the strong focus of the debate on differences between North and South have led some CEE MS feel pushed aside as soon as the going got really rough. The astonishingly generous sums allotted to them in the Commission proposal may go some way towards muting this political problem. Thus, the way the decisions on the distribution of funds ultimately are decided upon and communicated will play an enormous role for politics and economics.

Thomas Wieser is former President of the Eurogroup Working Group

Image credit: participation of Ursula von der Leyen, President of the European Commission, to the extraordinary Plenary of the European Parliament about the Multiannual Financial Framework (MFF) and the Recovery Instrument 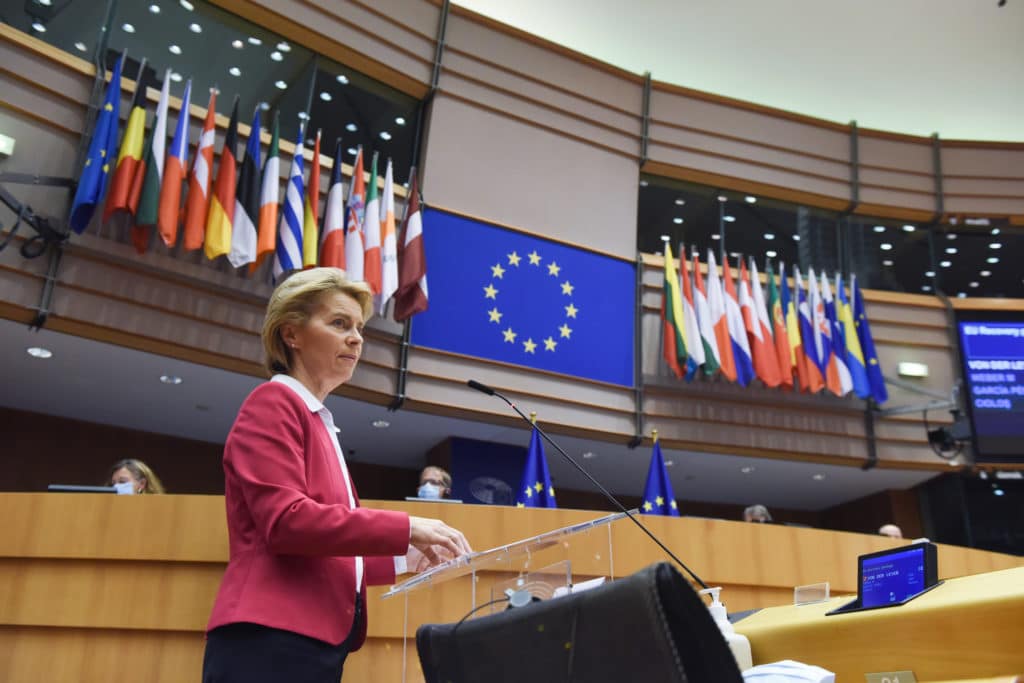