Unraveling the European Legal Order? One Step at a Time

When discussing the German Constitutional Court’s judgment on the ECB’s Public Sector Asset Purchase Programme in a recent newspaper interview President Koen Lenaerts of the CJEU posited that „ the first member state that ignores a judgment could unravel the entire European legal order.” (emphasis added)

President Lenaerts was not crying wolf; he painted a rather accurate picture of the future of Europe.

The unraveling of the European legal order does not need to be dramatic, like a coup: it can be slow and gradual – akin to the dismantling of constitutional democracy. In fact, the unravelling has already commenced. For the time being, the pace and manner of European disintegration is controlled by national governments that have a fight to pick on one issue or the other with ‘Europe’. Somewhat predictably, the Hungarian government is showing how member states can use this opportunity strategically, taking advantage of carefully identified gaps and cracks in the European legal order.

On Thursday, May 14  2020 the CJEU rendered a seminal judgment (C-924/19) concerning the treatment of asylum seekers in the transit zone at Röszke at the EU’s Hungarian-Serbian border. The transit zone is behind a tall barbed wire fence policed by armed guards, where the residents’ allocated living space is up to 13m2 in a container, and where they require permission to receive visitors. In response to requests to preliminary rulings the Court ruled that being held in a transit zone amounts to detention under EU law (Directive 2013/33/EU, Reception Conditions Directive, Article 2(h)), and that such detention cannot exceed 4 weeks. The families in the underlying cases ‘stayed’ (to use the Hungarian official terminology) for 464 and 526 days respectively in the facility without being able to leave.

In response to the CJEU’s judgment in his weekly Friday interview on Hungarian public radio Prime Minister Orbán explained that the CJEU judgment is part of „coordinated attack” by the EU on Hungary. As if echoing the German Constitutional Court, PM Orbán emphasized that „it’s absolutely clear that if the European Court of Justice makes a decision that conflicts with the Hungarian Constitution – and now this is the situation unfolding before our eyes – then the Hungarian Constitution must have priority”.

Then the Hungarian government met on Wednesday to discuss EU matters. On Thursday, May 21, 2020 the Minister of the Prime Minister’s Office, Gergely Gulyás announced at a press conference that although the Hungarian government disagrees with the CJEU, it will close the transit zones. Current residents will be transferred to alternative facilities depending on their legal status. In the future Hungary will only accept asylum applications at its foreign representative offices.

This sounds like a major victory for European integration, putting concerns about said unravelling to rest. On closer examination, this in fact is a well-considered strategic move wherein the Hungarian government reaps the rewards of its decade-long efforts to shape the future of Europe to its liking.

Note that at the very same press conference Minister Gulyás left no doubt about Hungary’s plans: with reference to German Foreign Minister, Heiko Maas’ urging a European solution to distribute asylum seekers, he celebrated as a major victory of Hungarian diplomacy that Hungary cannot be required by others to direct who gets to settle within her borders.

As for asylum seekers: their fate now hangs on the success of high European politics – against the backdrop of a hyper-fragmented and inconsistent European human right regime, marked by two supra-national courts that appear to disagree on the basics (e.g. on what constitutes ‘detention’). Admittedly, the CJEU has offered clarity on key issues in the past few weeks. And then the German Constitutional Court kicketh the hornets’ nest.

Immigration has long been a key priority of the Orbán government: it has waged a war against the ’forced settlement of migrants on Hungarian soil’ (to use the government’s terminology) by a comprehensive arsenal of political and legal tools, garnished by all-invasive propaganda and a loud commitment to Christian values. And its disruption strategy appears to be succeeding. It was the resulting state of affairs that the German Foreign Minister called refugee policy the EU’s ‘biggest inadequacy’ in early May 2020.

A month before, in early April 2020 the CJEU found in an infringement case that Hungary’s resistance to the European temporary relocation mechanism violated EU law (esp. Article 72 TFEU). In particular, the CJEU recalled that for the purposes of derogation under Article 72 “the scope of the requirements relating to the maintenance of law and order or national security cannot therefore be determined unilaterally by each Member State, without any control by the institutions of the European Union” (para. 146).

Without outlining the details of the Hungarian position, suffice it to say that in the Hungarian political and constitutional imagination refugee policy has been elevated into a question of constitutional identity. Following the latest reelection of the Orbán government in the spring of 2018, the Fundamental Law was amended to expressly provide: “No foreign population shall be settled in Hungary.” (Article XIV(1), Seventh Amendment). The government described the Seventh Amendment as a gesture of protecting national sovereignty: “reinforc[ing] the fundamental principle that is often applied in international law according to which the state has the right to determine who can live on its territory.” The judgment of the German Constitutional Court fills these passages with new life.

A ‘stay’ in the transit zone: A truly ‘pratical and realistic’ take

The political heights of EU refugee policy are in sharp contrast with the ground conditions of the Röszke transit camp that were put before the CJEU in cases where the applicants were represented by the Hungarian Helsinki Committee.

The applicants in the underlying cases were facing expulsion to Iran and Afghanistan. They arrived via Serbia, but Hungarian authorities refused to process their asylum application by virtue of Hungarian legislation that qualifies Serbia as a ‘safe transit country’ and expects asylum applications to be filed there. At the same time, Serbia refused to readmit the applicants on the grounds that they did not enter the territory of Hungary illegally, and as such did not qualify for readmission under the EU-Serbia readmission agreement. And thus they ended up ‘staying’ at the Röszke transit zone, while awaiting legal procedures to unfold on whether they will ultimately be returned to their home countries against their will.

The Röszke transit zone is an infamous spot on the map of Europe. It is the place where asylum seekers ‘staying’ in the custody of national authorities get fed when expressly directed so by the European Court of Human Rights, in a country where it has been a crime to assist illegal migration since the summer of 2018. Upon a site visit, the UN High Commissioner for Refugees Filippo Grandi called the Röszke facility ‘in effect’ a detention center in the fall of 2017. In the fall of 2018 two members of the UN Working Group on Arbitrary Detention were denied access to the transit zones. In response, they suspended their official visit to Hungary, noting that “there can be no doubt that holding migrants in these ‘transit zones’ constitutes deprivation of liberty in accordance with international law.”

The CJEU agreed that a ‘stay’ in the transit zone could be classified as detention under the Reception Conditions Directive. In doing so the CJEU squarely disagreed with the Grand Chamber of the ECtHR (Ilias and Ahmed v. Hungary).

In November 2019 the Grand Chamber — in the case of other applicants, also represented by the Hungarian Helsinki Committee — overturned a unanimous Chamber judgment to conclude that Article 5 of the ECHR on the right to liberty did not apply in the case. In particular, “in the absence of a direct threat to the applicants’ life or health, known by or brought to the attention of the Hungarian authorities at the relevant time, the discontinuation of the applicants’ asylum proceedings in Hungary was a legal issue which did not affect their physical liberty to move out of the transit zone by walking into Serbian territory” (para. 248, emphasis added). As the dissenting judges pointed out, the majority did not take into account that the applicants could not enter Serbia lawfully. (At the same time the ECtHR found that had the applicants left towards Serbia, they ultimately would have risked being returned home, in violation of the principle of non-refoulement, and thus of Article 3 of the ECHR.)

It is certainly possible to distinguish the two European judgments on several technical legal points: the CJEU applied the Reception Conditions Directive, while the ECtHR decided under the ECHR;  the ECtHR found that the applicants were physically free to leave towards Serbia (if unlawfully and at the risk of ultimately being returned to their home countries), while the CJEU accepted that the applicants were not free to leave; this list could be continued. While these differences are not insignificant, the fact that the Chamber judgment of the ECtHR unanimously went the other way suggests the degree of nuance the fate of asylum seekers hinges on in Europe.

Its take on Article 5 ECHR is what the Grand Chamber of the ECtHR calls a ‘practical and realistic approach’ that is mindful of ‘present day conditions and challenges’ (para. 213). This approach however results in inconsistencies that generate uncertainty about the applicable European human rights standards. Given this degree of uncertainty it is hardly a surprise that the Hungarian government was pleased to redistribute the residents of the transit zones, knowing full-well that it has adequate resources to fend their claims off before the European courts in the coming years.

Without intending to do so, the German Constitutional Court placed the future of the European legal order – and ultimately the future of the EU – in the hands of the likes of Viktor Orban. Legal differences and uncertainties are easily turned into opportunities by strategic players for unraveling the European legal order – one step at a time. The political haggling over the allocation of asylum seekers in Europe will undoubtedly provide a perfect playground for rehearsing lines of national constitutional identity in the face of European imposition. And this will also be the political context where the CJEU’s long-expected judgment on whether the Hungarian law on “branding” NGOs that receive foreign funding violates EU law (C-78/18) will land.

As it turns out, ‘unraveling’ appears to capture the Zeitgeist rather accurately. 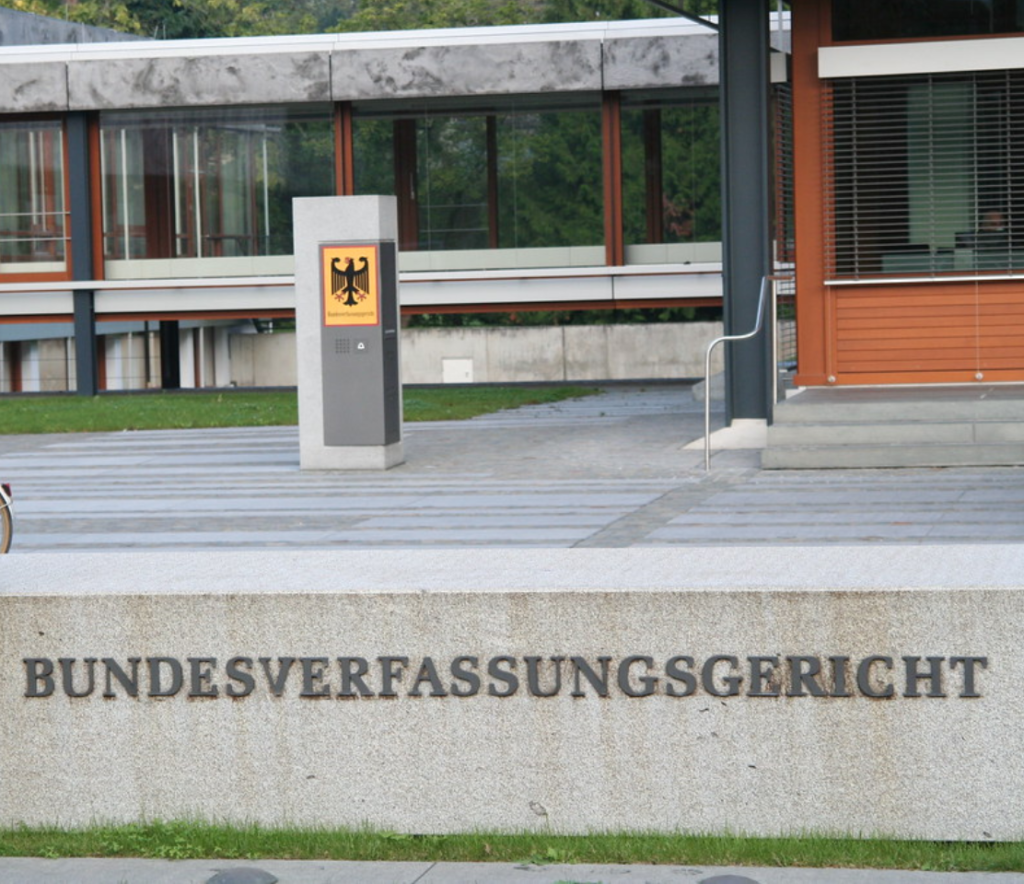