A few months back I read Anu Bradford’s much-debated article ‘The Brussels Effect’. Her main argument: through its stringent regulations the EU has set standards for countries across the world, shaping polices on a wide range of issues, from chemicals to privacy. Bradford has elaborated on the argument in a recently published book.

During recent weeks, I had to think about Bradford’s arguments again, mainly because commentators and politicians are once again proclaiming the end of the EU due to internal divisions and its indecisiveness regarding the ongoing Covid-19 crisis.

This is not the first time that the EU has been carried to the grave because of a crisis. In fact, as Davis Cross and Ma nicely show in their 2015 article ‘EU crises and integrational panic: The role of the media’, each crisis the EU is confronted with is quickly turned into an existential challenge.

At first sight, the EU does indeed appear to be in troubled waters. It has been unable to coordinate health policy responses and related decisions in light of Covid-19 and member states have been endlessly bickering about economic support measures. Indeed, being Dutch and living just 2.5 KMs from the Belgian border, it is easy to see some truth to this crisis rhetoric. For one, I had never thought that I would see border fences being erected at the end of my street. But also when following EU news, the Dutch position on how the EU should deal with the crisis is not exactly painted as a constructive and supportive one.

But let’s look at this new crisis in a bit more detail. And in particular at the economic policy response, because, let’s face it: the member states are primarily responsible for health policy, which may largely explain their unconcerted panic reactions (which does not mean that there are no lessons to be learned here). The economic response rests on the Commission’s policy response as well as on member states’ agreement regarding financial measures.

The Commission has been pursuing a policy of more flexibility regarding state aid to allow member states to deal with economic uncertainties. It has also launched the so-called instrument for temporary Support to mitigate Unemployment Risks in an Emergency (SURE). This instrument is meant to help protect jobs and employees affected by the current crisis by allowing for EU financial assistance to member states through billions of euros of loans from the Commission to member states. The EU finance ministers also recently agreed on a substantial support package, which includes use of the European Stability Mechanism (ESM). The new multi-annual budget may play a role here as well.

Yet, some challenges and questions remain unresolved, with Eurobonds being the most controversial issue (and dating back to the Eurozone crisis). It is also expected that more money will be needed – even up to 1 trillion more, according to Economy Commissioner Paolo Gentiloni. In other words, there has not (yet?) been a ‘Brussels effect’ during the current crisis and there are certainly grounds to criticise the EU’s response to Covid-19 – for a slow reaction, a lack of coordination, and so on.

Yet, we should also not forget that these are extraordinary circumstances. Countries across the world have struggled to come up with a good response. And the EU has only seldomly been the first to react to extraordinary circumstances. So, will the current response be sufficient? Probably not. But does that mean that the EU’s end is near? Probably not either. It is more likely that the EU will muddle through this crisis, just like it did at the time of previous crises.

Meanwhile, take care of yourselves and your loved ones. #bloggingfromhome

Image credit: photo taken by the Author of the barrier near the border between Netherlands and Belgium (Patrick Bijsmans personal collection) 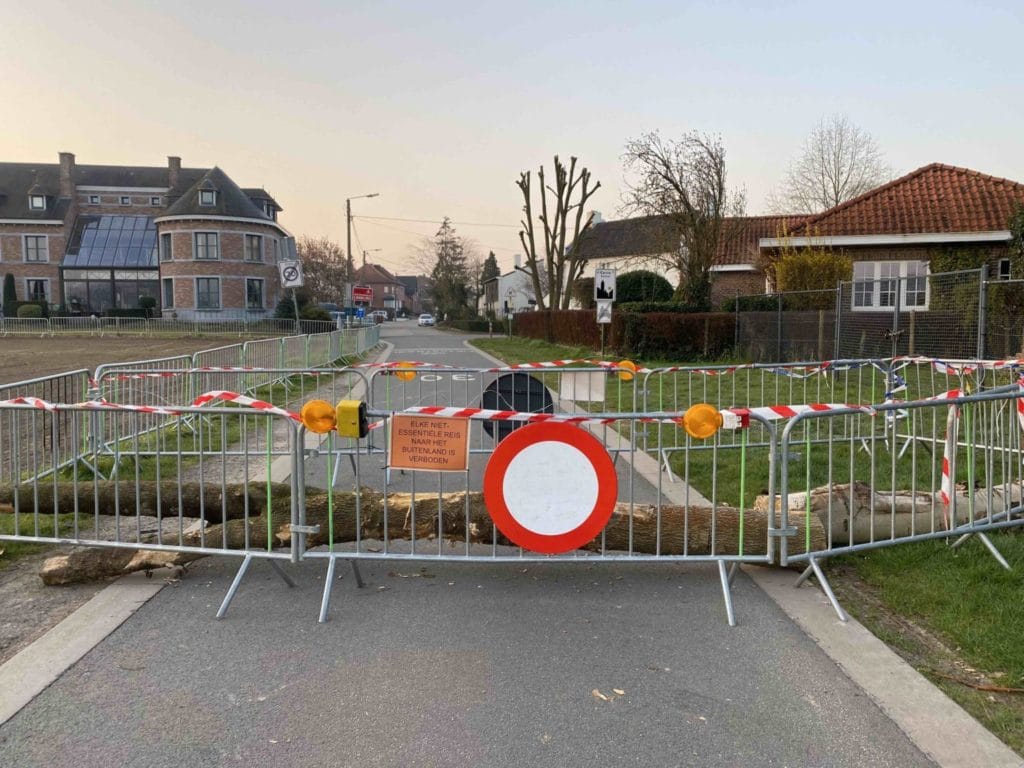