For the last decade, the European Union (EU) has been afflicted by one crisis after another. These various “crises” seemed at times to blend into one, giving the impression that Europe has been embroiled in one continuous rolling “crisis.”  For the sake of analytical clarity, however, these crises should be treated as separate, albeit interconnected: we should, first, separate the various crises from one another, and second, identify whether and to what extent each crisis has influenced the others. A framework for analysis of these political events can lead to a deeper understanding of the causes and consequences of the crises, which in turn can pave the way for common solutions.

A consortium of four institutions has recently won EU funding to form a Jean Monnet Network called BRIDGE (Brexit Research and Interchange on Differentiated Governance in Europe). Its purpose is to investigate the interconnection between Europe’s crises, and to explore whether new forms of differentiated governance could provide a pathway to a post-crisis EU. Four crises in particular will be the focus of BRIDGE:

While there are important differences between these, they share certain commonalities that warrant treating them as a group. First, they are broadly contemporaneous, insofar as each of them has undergone an acute phase in the last decade. Second, all four crises are to some extent endogenous (generated from within): while some may have been triggered by an outside event (e.g. a financial crisis in the USA, a sudden flow of refugees from the Middle East), they became acute crises for the EU when they exposed internal weaknesses in the EU’s governance structures. Third, and most important, each of these crises posed or continues to pose a fundamental challenge to the political, economic, and/or legal order of the EU. The Euro-Crisis and Brexit raised the possibility of a contagion that could break apart the Union itself; and the other two crises pose a threat to fundamental values – respectively, the Rule of Law, respect for human rights, and freedom of movement – on which the Union is founded.

It is natural to hypothesize that these four crises have influenced one another. However, it is likely that the nature and extent of the mutual influence of these four crises varies considerably. Furthermore, to discover this variation is a matter for empirical research. If you imagine each crisis as a separate entity, which may influence and be influenced by each of the three others, then there are twelve possible avenues of influence, corresponding to twelve causal arrows: 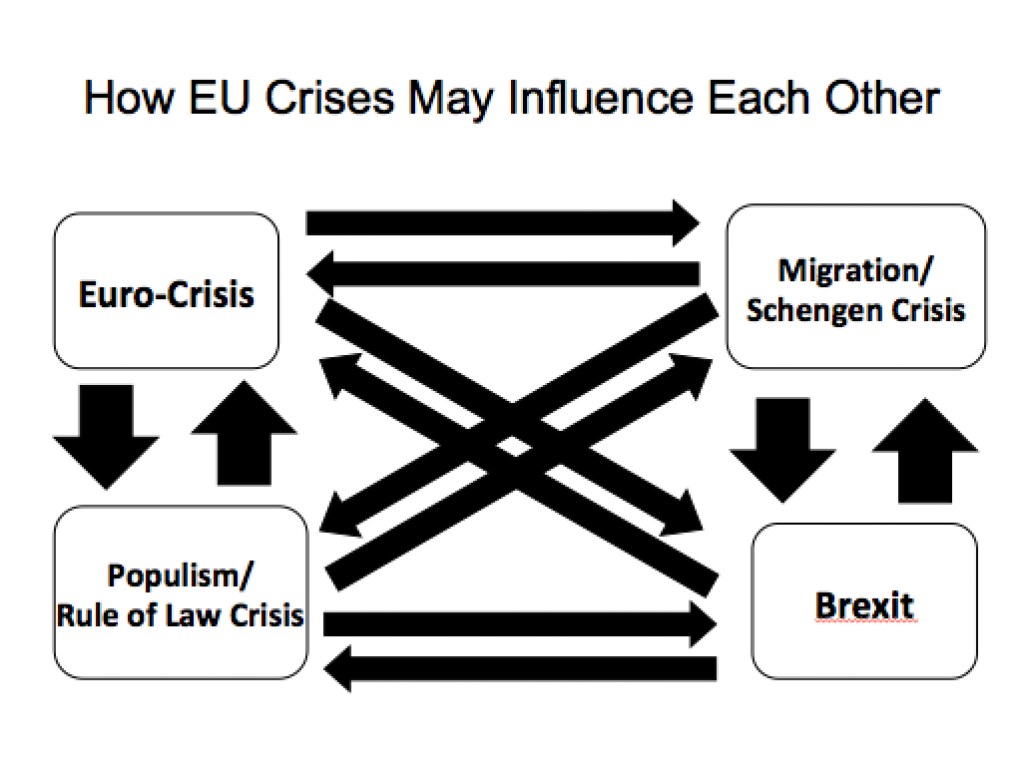 Breaking down the relationship between the four crises in this way provides a first sketch at a framework for analysis for the research agenda of the BRIDGE network. When arranged systematically in a table (see below) the inter-relationships become apparent: with a few exceptions almost all of cells in the table are filled.

It is hoped that this framework for analysis will facilitate research that can yield unexpected results. To illustrate, look at the causes and consequences of just one of these – Brexit. Regarding the causes of Brexit, the other three crises probably contributed, to varying degrees, to the feeling among UK voters that the EU was in a general crisis and that the UK would be better off outside of it. The Euro-Crisis was certainly a factor in the decision to hold a Brexit referendum in the UK, in that the UK government was concerned about having to pay to bail out troubled Eurozone states, and also sought assurances that UK firms, being outside the Eurozone, would not in future lose access to the EU single market in financial services. Migration was also a factor in the referendum in that voters were reacting to the large numbers of migrants from Central and Eastern Europe had entered the UK after the 2004 enlargement and, separately, the fact that by the mid-2010s large numbers of migrants were arriving in the EU from outside (though very few reached British shores). As for the Rule of Law crisis, it was probably not well known to British voters but may have contributed to a general sense that the EU is corrupt and undemocratic.

However, if we look at the consequences of Brexit, we are led to the opposite conclusion: while Brexit has had some impact on the Euro-crisis and Migration (its economic impact and effect on citizens’ rights are still uncertain) it has had an unexpected impact in that it has contributed to the erosion of the Rule of Law in the EU. For example, when the EP voted in September 2018 to open the Article 7 process against Hungary, a member state in which the Rule of Law is being systematically undermined, the UK Conservative MEPs voted against the measure, in the hope that the autocratic Viktor Orban would be friendly to the UK in the Brexit negotiations. Moreover, Brexit has even contributed to the erosion of the Rule of Law in the UK itself, as apparent in some of the actions of the government, e.g. the unlawful prorogation of parliament.

BRIDGE is a multi- and inter-disciplinary research network that embraces methodoligical pluralism. It would be inappropriate and futile to make the members of the network conform to a single approach to the subject matter. Similarly, no attempt is made here to give a precise definition to the four crises which are under study, because to do so would in effect pre-empt the analysis of the researchers. Each “crisis” – and we recognize that the word itself is deeply politicized – is elastic, whether with respect to time (its start- and end-date), space (which countries are affected) and scope (the material extent of the policy fields affected). On the other hand, it is useful to set out an analytical framework that is open and flexible enough to accommodate the research contributions and help them to fit together in a coherent way. This will ensure that the members of the BRIDGE network will be asking similar questions, even if their research yields quite different answers. 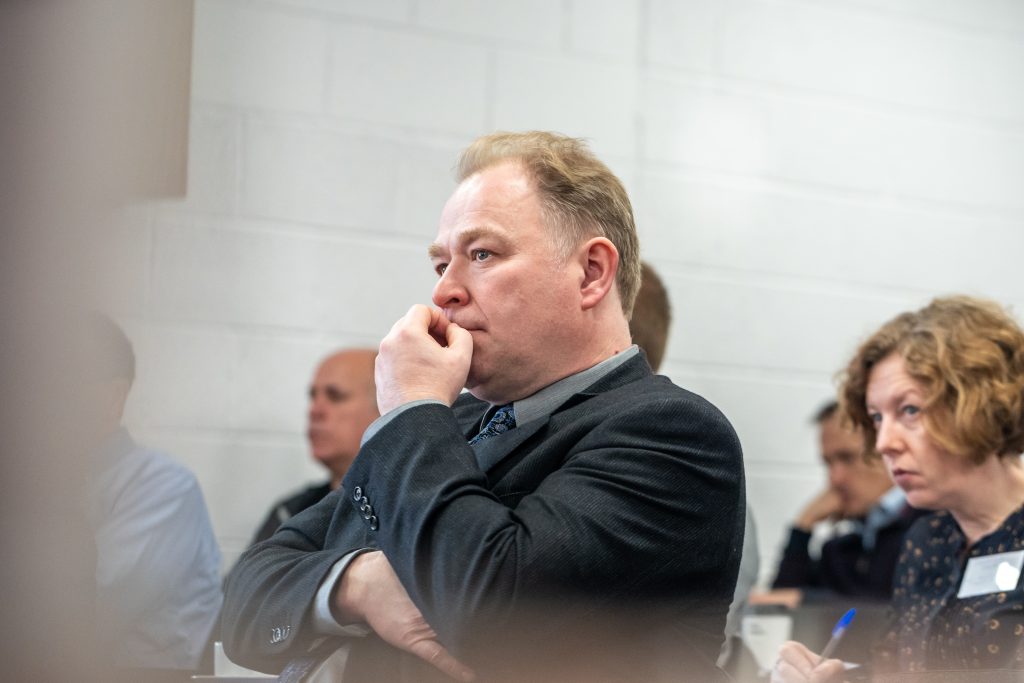