Event Report: The Rule of Law Crisis and the Future of EU Governance

On January 27-28 2022, the Jean Monnet Network BRIDGE held its eighth conference, hosted by the Democracy Institute of Central European University in Budapest, live over Zoom. The theme of the conference was The Rule of Law Crisis and the Future of EU Governance.

The conference began with a welcoming statement from Laszlo Bruszt (CEU Democracy Institute) introducing Ronan Gargan (Irish Ambassador to Hungary), who made forceful and wide-ranging remarks about the importance of the Rule of Law in the EU. This was followed by Panel 1, on the State of the Rule of Law Crisis, chaired by Federico Fabbrini (DCU Brexit Institute). To begin, Renata Uitz (CEU) gave a broad overview of the Rule of Law crisis, noting how it has become “normalized” over the last decade as a fact of life in EU politics. She surveyed the roles of various institutions, highlighting the importance of the European Court of Justice (ECJ) and the European Court of Human Rights, as well as the European Parliament for its coherent long-term defense of the Rule of law in historical context. Next Armin von Bodgandy (MPIL) argued that the European Rule of Law could support democratic transitions by supporting the idea that biased judges could be found to be criminally responsible for disrespecting the Rule of law – a proposal that prompted a great deal of lively discussion. This was followed by Ruzha Smilova (Sofia University / Centre for Liberal Strategies), who reported on the turn towards Identitarian Constitutionalism in Bulgaria; the Bulgarian Constitutional Court has advanced a very conservative structural interpretation of the national constitution that rejects the concept of “gender” in favour of “sex” as a fixed biological and binary category. Finally, the Justin Frosini (Bocconi / SAIS Europe) assessed the effect of Brexit on the Rule of Law, enumerating the numerous occasions, from triggering Article 50 without parliamentary consent to prorogation, in which the UK government acted or attempted to act in contravention of the Rule of Law throughout the Brexit process.

Panel 2 of the conference was chaired by Renata Uitz, the theme of which was the Rule of Law Crisis and the Migration Crisis Shaping the Future of Europe. To begin, Janine Silga (DCU) identified the “fractured values” underlying the EU’s migration and asylum policy. She took note of the incoherence of the ECJ’s case law after the migration crisis and its failure to make the connection between migration and the Rule of Law. Magdalena Smieszek (CEU) argued strongly that migration is fundamentally a humanitarian crisis rather than an institutional crisis; she made the case from the perspective of social psychology to see migration from a human point of view, drawing upon evidence from the Conference on the Future of Europe to make this point. Leila Hadj Abdou (University of Vienna) argued that EU migration policy is inherently ambivalent about whether its purpose is protection or prevention; she noted that the politicization of the migration issue (salience combined with polarization) has not been uniform across EU member states. Finally, Orsolya Farkas (unibz) shared some empirical findings regarding the experience of migrant children in Italian students, both in terms of integration (where the student adapts to the environment) and inclusion (where the environment adapts to the student).

The first day of the conference was concluded with a Keynote Speech chaired by Renata Uitz from Adam Bodnar (Professor of Law and Dean, Law Faculty, SWPS) who is the Former Human Rights Ombudsman of Poland, on Dismantling the Rule of Law in Poland: Methods and Resistance. In a rhetorical tour de force, Bodnar gave a remarkably thorough analysis of the history of the Rule of Law crisis in Poland. He not only detailed how the state had methodically subordinated most the key institutions of Polish society but also showed how many institutions stood up to the regime. He concluded that institutional safeguards alone may not be enough to defend the Rule of Law. Furthermore it is possible for the lawbreaking regime to effectively ignore the concerns raised by international organizations, including the European Union, for long periods of time. The pandemic proved to be a state of exception that could be effectively exploited by the regime. However, he held out hope that the mobilization of civil society to organize in the street to protect and defend political rights would prevail.

Reconvening on Friday morning, the conference took a theoretical turn with the Panel 3 discussion, Beyond the Rule of Law Crisis: the Supremacy of EU Law, chaired by Renata Uitz. To begin Federico Fabbrini (DCU) made a forceful case for Reclaiming the Supremacy of EU Law, against the growing doctrinal tendency towards constitutional pluralism within legal scholarship and weakening enforcement from EU institutions, in particular the Commission. Dimitry Kochenov (CEU Democracy Institute) countered that Supremacy should not be seen as a fundamental principle of EU law because it is a simple fact of any legal system; EU law should be the embodiment of substantive legal principles that are analogous to those of the legal and constitutional orders of France, Germany, etc. In turn, Ana Bobic (ECJ) argued that the question of Supremacy must be separated from the Rule of Law crisis; challenges to Supremacy are an in the nature of a multilevel legal system. She argued that the EU legal system should strive not for uniformity but coherence. Finally, Stefania Baroncelli (unibz) argued that the Supremacy debate has entered a new historical phase, characterized by a (mostly) fruitful dialogue between the ECJ and national constitutional courts, resulting in the Supremacy of EU law being moderated by national constitutional identity.

Panel 4 on the Future of the Rule of Crisis: Beyond Dialogue and Conditionality was chaired by Stefania Baroncelli (unibz). To begin, Ronan McCrea (UCL) argued that the Rule of Law may be understood as either a narrow or a broad concept. He distinguished between three types of threats to the EU posed by illiberal regimes: attacks on judicial independence, attacks on pluralist principles (e.g. media freedom) and conservative attacks on individual freedoms (e.g. gay and trans rights); he argued the only the first of these should be met with EU-level judicial enforcement; the other attacks should be met with a political response. Maciej Bernatt (University of Warsaw) analysed the threat to the Rule of Law from national competition authorities in the form of the selective enforcement and non-enforcement of competition rules. Finally, Teodora Miljojkovic (CEU) analysed the principle of the separation of powers as “characterizing the operation of the Rule of Law” as a standard for the assessment of judicial independence in both liberal and illiberal states.

Finally, Panel 5, chaired by Renata Uitz, looked at Eastern European Perspectives on the Rule of Law Crisis and Constitutional Change, assessing the prospects for reversing the Rule of Law decline in Hungary and Poland. To begin, Viktor Kazai (CEU) gave a thorough diagnosis of the problem facing the new Hungarian government if the opposition wins the upcoming election: without a constitutional (super-) majority in parliament, the new government will lack the power to remove the many Orban loyalists installed in powerful government positions. He then analysed various theoretical justifications which could be deployed to overcome these legal obstacles, and outlined a number of post-election strategies and scenarios. Next, Zoltán Fleck (ELTE) outlined a public law plan for the opposition in the case of victory in the upcoming elections. Hungary’s EU membership provides an opportunity to restore the Rule of Law: as the regime has been frequently denounced by EU institutions for Rule of Law violations, the restoration of the Rule of Law may be framed as fulfillment of its obligations as an EU member state. The last speaker on the panel, Barbara Grabowska Moroz (CEU DI), addressed the situation in Poland, where the opposition – if it wins the next election – must also work to restore the Rule of Law. Finally, the conference heard again from Ronan Gargan (Irish Ambassador to Hungary), who made closing remarks inspired by the discussion regarding Brexit and Northern Ireland, expressing his hope for the restoration of the Rule of Law across the EU. 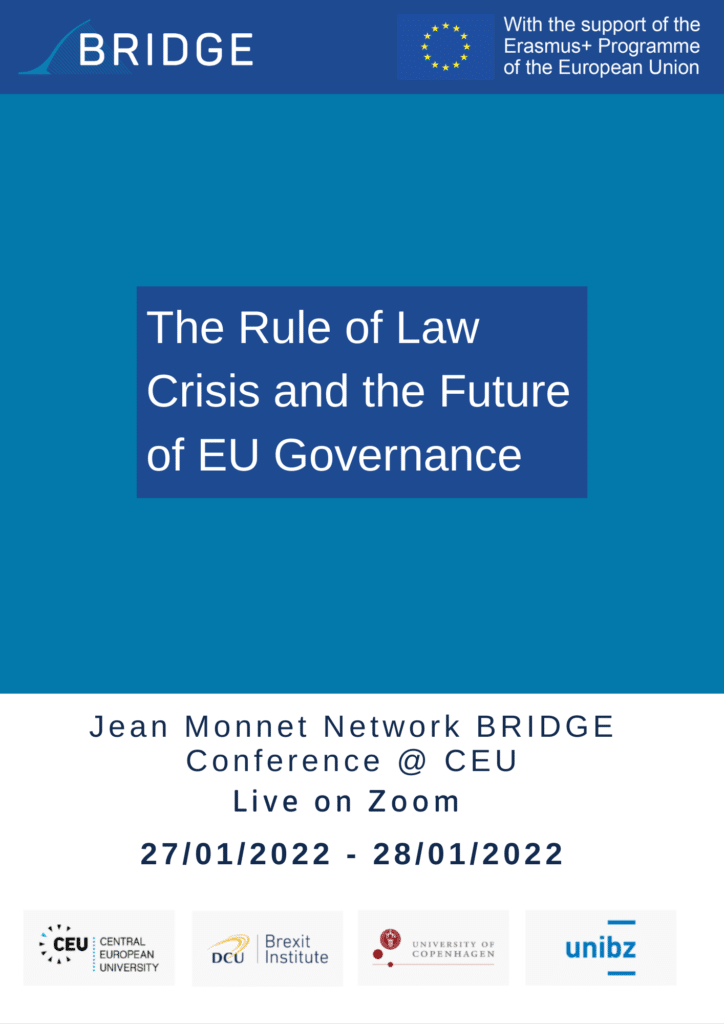