Attempting to calm the financial markets and regain investors’ trust, then President of Spain José Luis Rodriguez Zapatero (Socialist Party) promoted a reform of Art.135 of the Spanish Constitution. Designed to “guarantee the principle of budgetary stability” and “the economic and social sustainability of the country”[3], the reform, approved in September 2011, established the obligation of maintaining budgetary stability accordingly with EU norms. The introduction of this provision was in line with the demands of the European Fiscal Compact, passed in 2012.

2012 was a critical year for Spain. In February of that year, the recently elected Government of President Mariano Rajoy (People’s Party) adopted a law for the reform of the labour market[4], aimed at fighting unemployment (which was at a rate of 24.8% at that moment)[5]. In May, the Spanish government carried out the biggest bank bailout in the country’s history (more than 20 billion Euros)[6]. Finally, in July, the Eurogroup approved the €100 billion financial assistance programme for bank recapitalization in Spain[7].

As a result, the Spanish Government adopted a series of austerity measures, including budget reductions for social, education and health policies, resulting in increased inequality[8]. Protests against budget cuts spread during the years of the crisis, being the most notable one the “15-M Movement”.

As an external border of the EU, the Spanish frontier with the Mediterranean sea has been a hotspot in recent years. Spain was, together with Greece and Italy, one of the most affected member states by the migration crisis. In particular, in 2018 64,298 people irregularly crossed the Spanish border[9] (an increase of 131% over the previous year). In July of that year, the number of arrivals to Spain exceeded for the first time those of any other Mediterranean route: 7,855 arrivals compared to 1,944 and 2,545 for Italy and Greece[10].

The Spanish response to the crisis consisted of a coordinated approach with the EU, that resulted in the disbursement of 140 Million euros to Morocco to strengthen its border control, as well as the promise of resuming the negotiations on readmission and visa issuance processes[11]. Bilateral relations also played a key role: Spanish King Felipe VI visited Morocco’s King Mohamed VI in February 2019[12], and two weeks later both states reached an agreement that allowed Salvamento Marítimo (the search and rescue agency of Spain) to return rescued boats to the Moroccan coast when they were closer to the Moroccan coast than to the Spanish coast[13].

Spain has repeatedly called for more EU cooperation and the development of a common European policy on migration, asylum and borders[14].

The Spanish government has aligned with the EU institutions and several member states[15] on the necessity of protecting the rule of law within the EU.

The situation of the Spanish Judicial Council, whose members are entirely elected by the Spanish Parliament (from a list proposed by the judges), has awakened several criticisms on the part of the EU and CoE[16], which have called for it to be reformed in accordance with the European standards. Polish and Hungarian authorities have taken advantage of this situation, and claimed the EU uses double standards as it does not activate Art.7 against Spain[17]. However, the EU has publicly expressed the opinion that the Spanish Judiciary does not suffer from a systemic threat, and that the situation with the Judicial Council is a “one-off issue, not a general problem”[18].

The most controversial issue for Spain regarding Brexit was the situation of Gibraltar, a British Overseas Territory contiguous with Spain, situated at the southern tip of the Iberian peninsula. To guarantee the free movement of goods and people between Gibraltar and Spain was a priority for both territories. While the former is entirely dependent on imports, 15,000 Spaniards cross the border to Gibraltar to work daily. Gibraltar’s special financial situation posed a controversial challenge, as well as Spanish claims of sovereignty over the territory.

The withdrawal agreement negotiated between the EU and UK did not dealt with the status of Gibraltar[19], and hence its future still depends on the negotiations between Spain and the UK. In December 2020, Spain and the UK reached an agreement in principle for the inclusion of Gibraltar in the Schengen space by eliminating all physical barriers, and for adapting the EU’s customs union to Gibraltar[20].

Spain does not have any opt-outs. Indeed, it participates in several mechanisms of enhanced cooperation: the border-free Schengen Area[21], the applicable divorce law regulation[22], the property regimes for international couples[23], and the recently established European Public Prosecutor[24]. It also takes part in the EMU since 1999. Euro notes and coins were introduced in Spain in 2002.

Spain takes part in EuroMed9, an informal group composed by Southern member states (traditionally Spain, Cyprus, France, Greece, Italy, Malta, and Portugal, but more recently incorporating Croatia and Slovenia), of which most of them have borders with the Mediterranean sea (Portugal being the only exception). The group, created in 2013, meets once or twice a year since 2016 to discuss common interests and policy approaches in areas such as migration, economy, Brexit, defence or climate change, among others[25].

The Canary Islands, in the Atlantic Ocean, receive the status of “Outermost Region”, i.e. geographically remote regions of the European continent (Art.349 and 355 TFEU). The EU acquis is fully applicable in the Canary Islands, although there exist some exceptions to EU policies. VAT tax does not apply in the Canary Islands. Nevertheless, there is the AIEM tax (Arbitrio sobre Importaciones y Entregas de Mercancías en las Islas Canarias), aimed at protecting local producers by taxing importations[26].

The Spanish Autonomous territories of Ceuta and Melilla, located in the African Continent, also enjoy a special status within the EU. Firstly, they are not included in the EU customs territory, although both products imported and exported from Ceuta and Melilla to EU territory and vice versa are exempt from customs duties, in accordance with Art.2 of Protocol 2 of the Act of accession of Spain to the EC[27]. Secondly, they are not included in the Schengen area, as specified in the agreement of the accession of Spain to Schengen[28], in order to guarantee the free movement of people between these cities and the nearby Moroccan cities. Nonetheless, the Spanish government has recently raised the possibility of their accession to the Schengen space[29].

Spain borders the Principality of Andorra, a micro-state located in the Pyrenees. Andorra and the EU signed a customs agreement in 1990[30], which facilitates trade relations between Spain and Andorra. There are limits to the amount of products that can be brought across the border. Moreover, Andorra uses the Euro as its de facto currency since 2002, and as its official currency since 2012. Andorra is outside the Schengen area of passport-free travel, as there are checks at its borders with France and Spain. Spanish citizens visiting Andorra do not need a visa, but just their national identity document or passport[31].

Spain was one of the EU countries most affected by the COVID-19 crisis, and particularly by the first wave of contagion in Spring 2020. On March 14th, 2020, the Spanish Government declared the first State of Alarm, an exceptional situation that allows the government to limit certain fundamental rights such as the freedom of movement. A lockdown was imposed, and all non-essential activities were completely paralyzed for two weeks in April. De-escalation started in May, and the State of Alarm ended on 21st June. Nonetheless, the worsening of the situation and the successive contagion waves resulted in the declaration of a second State of Alarm (9-24 October 2020, only affecting the Autonomous Community of Madrid) and third State of Alarm (25 October 2020 – 9 May 2021)[32]. Spain is a decentralized state, therefore the Autonomous Communities played a key role during the States of Alarm. Regional governments had the competence to determine the hours of application of the curfew (within the time slot set by central government), and whether to restrict the entry and exit of people from their territories or not, depending on the epidemiological situation. In July 2021 the Constitutional Tribunal of Spain declared unconstitutional some of the provisions of the first State of Alarm[33].

The COVID-19 pandemic severely affected both economy and society. The Spanish GDP 2020 fell by 10,8%, the worst downturn compared to the rest of the Eurozone where the average fall in GDP was 6.7%[34]. Teleworking spread, as a result of social distancing measures. Capacity limitations were imposed in enclosed places (shops, churches, etc.), as well as restrictions to the activity of bars and restaurants. The use of face-masks extended, and was compulsory in both closed and open spaces.

Vaccination in Spain has been a success. Spain achieved the objective of having 70% of its population fully vaccinated by 1st September 2021[35].

Spain approved its €69.5 billion in grants Recovery Plan in April 2021, and the Commission positively evaluated and passed it in June 2021[36]. In August, Spain received the first €9 billion of pre-financing[37]. Spain is expected to receive up to €140 billion up to 2026 for transforming its economy accordingly with green and digitalization principles.

Spain has maintained a low profile with regards to the Conference on the Future of Europe. This timid position contrasts with the pro-European feeling of most Spaniards[38]. Several citizens’ dialogues, called “Dialogues on the future”, have been organised for Autumn 2021 in all the Autonomous Communities. Each of the dialogues addresses a different issue, including matters such as energy, science, youth, employment or education, among others[39].

[15]  In a joint call to the EU signed by Spain and the Netherlands, both member states called for: “Commitments strengthen the rule of law” (Brzozowski, A. (2021) “Netherlands, Spain lead the way for more EU strategic autonomy”, Euractiv, 25 mar 2021, Available at: https://www.euractiv.com/section/global-europe/news/netherlands-spain-lead-the-way-for-more-eu-strategic-autonomy/). Spain has also been one of the MS that have directed more questions in the hearings celebrated on the basis of Art.7 procedure to discuss the rule of law situation in Poland (Michelot, M. (2019) The “Article 7” proceedings against Poland and Hungary: what concrete effects?, Blogpost, Jacques Delors Institute, Available at: https://institutdelors.eu/en/publications/__trashed/)

[17]  Hungarian Foreign Minister Péter Szijjártó asked in a press conference: “If something is good in Spain, then why is it bad in Poland?” (Gehrke, L. (2020) “Poland, Hungary to set up rule of law institute to counter Brussels”, POLITICO, September 29, 2020, Available at: https://www.politico.eu/article/poland-and-hungary-charge-brussels-with-double-standards-on-rule-of-law/).

[23] Council of the EU (2016) Council Regulation (EU) 2016/1104 of 24 June 2016 implementing enhanced cooperation in the area of jurisdiction, applicable law and the recognition and enforcement of decisions in matters of the property consequences of registered partnerships, Official Journal of the European Union, L 183/30, 8.7.2016, Available at: https://eur-lex.europa.eu/legal-content/EN/TXT/?uri=CELEX%3A32016R1104

[38] Aldecoa, F. (2021) Spain, with its back to the Conference on the Future of Europe, Atalayar, 29 April 2021, Available at: https://atalayar.com/en/blog/spain-its-back-conference-future-europe 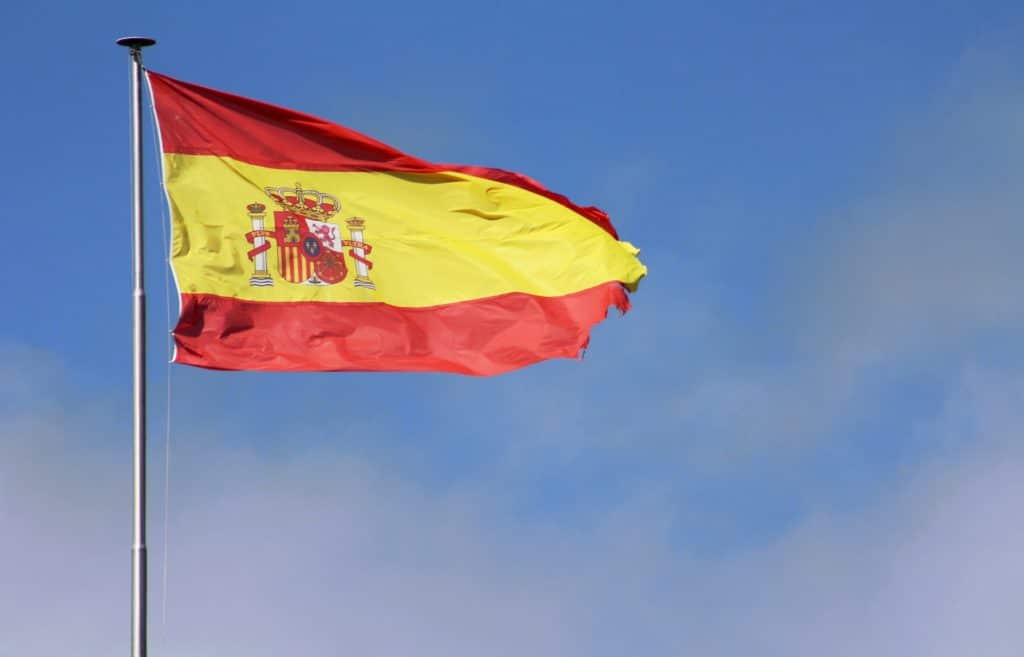