The global financial crisis hit Lithuania in 2009, with GDP growth plummeting by more than 15 per cent that year. However, it fared better than its Baltic neighbours, with cumulative output loss in 2008 and 2009 at 11.9 per cent compared to Latvia’s 21 per cent and Estonia’s 18.3 per cent. The crisis impacted the Baltic states more severely than other EU countries because of their open economy and a large export sector heavily reliant on Western European supply chains. A strict austerity policy imposed by a new Homeland Union–Lithuanian Christian Democrats government with Andrius Kubilius as Prime Minister helped to curb the impact of the financial crisis in Lithuania. The government acted swiftly to introduce public spending cuts with top public sector salaries reduced by 20 per cent, a hike in taxes and postponement of investment and structural reform. The Lithuanian government managed to undergo these drastic fiscal adjustments without requiring the help of the International Monetary Fund (IMF) and managed to emerge from the depths of the financial crisis relatively quickly, with GDP beginning to stabilise and grow by the end of 2009.

The current Lithuanian government has admitted that they were not fully committed to showing solidarity with Greece and Italy during the 2015 refugee crisis. Lithuania was asked to accept approximately 1,100 refugees back then to help the European Union (EU) cope with the influx of refugees. They only managed to accept around half of this quota, with around 50 refugees remaining in the country to this day. Therefore, the migrant crisis has not been a significant issue in Lithuania domestically, that is, until recently. Following a significant political fallout between Belarus on the one hand and Lithuania and the EU on the other, Belarus’s president, Alexander Lukashenko, has eased its border controls allowing swathes of illegal migrants to pass through into neighbouring Lithuania. In the first thirteen days of July 2021, around 1,720 migrants entered Lithuania illegally. This means that eight times more refugees (mainly from Iraq and Africa) entered Lithuania than have in the past three years combined. This has led Lithuania to announce a nationwide state of emergency.

The Lithuanian government contends that President Lukashenko has deliberately funnelled refugees into Lithuania in retaliation against stringent EU sanctions following the grounding of a passenger plane destined for Vilnius in Minsk to arrest opposition journalist Roman Protasevich and his partner in May 2021. Relations are also strained between Lithuania and Belarus following Lithuania’s outspoken political stance in support of Sviatlana Tsikhanouskaya, who claimed to have won the presidential elections in Summer 2020. Following major civil unrest and clashes between civilian and Belarusian forces, once Mr Lukashenko refused to concede his presidency to Ms Tsikhanouskaya, Lithuania offered her refuge from the Belarusian government forces. Therefore, the Lithuanian government has not hesitated to condemn the actions of  President Lukashenko, calling his use of migrants a deliberate and strategic “act of hybrid warfare” designed to destabilise Lithuania.

The unprecedented surge in migrants entering Lithuania has prompted a strict response from Lithuanian officials. Lithuania’s parliament swiftly amended migration laws which has caused some controversy due to fears that these new measures might be too stringent and could deny genuine political refugees asylum. There have also been reports of tear-gas and fire-arm use by police forces on migrants. Furthermore, Lithuanian officials have taken study visits to Hungary to take notes on their response to the migrant crisis. Like Hungary, Lithuania has also begun the construction of a fence to protect its borders from refugees. Hungary’s response to the migrant crisis has been heavily criticised by human rights NGO’s and the EU, so Lithuania using this country as a role model could prove to be controversial. Overall, the Lithuanian government has taken a hard-line approach to refugees seeking entry into Lithuania. The chair of the Parliamentary Committee on National Security and Defence, Laurynas Kasčiūnas, stated in an interview that he wants migrants to communicate to their friends and family back home that Lithuania is not a viable route to enter the EU.

Lithuania has supported its neighbour Poland since it has become a target for criticism from the EU due to rule of law and judicial independence violations. This is a very pragmatic stance for Lithuania as it has proven to be keen to strengthen bilateral relations with its larger neighbour. The former Lithuanian Prime Minister, Saulius Skvernelis, declared that Lithuania “will never support or agree to” EU sanctions against Poland during a joint meeting with Polish Prime Minister Mateusz Morawiecki in September 2020. Mr Skvernelis also sympathised with Poland’s stance stating that Lithuania is better positioned to understand Poland’s recent reforms due to their shared Soviet legacy. In 2019, Lithuania’s President, Gitanas Nausėda, called for more dialogue and mutual understanding between Poland and the EU instead of sanctions.

This political stance is not surprising for Lithuania as it has had some notable issues with its own rule of law compliance recently. Since Lithuania’s Peasants and Greens Union (LPGU) entered government in 2016, there have been worrying attacks on media freedom and judicial independence. LPGU gained popularity by running based on a populist message of nationalism, traditionalism and conservatism, which attracted many voters discontented with mainstream parties that had been in power for much of the previous decade. Throughout its time in power, LPGU was criticised for its attempts to push through legislation sanctioning any criticism of politicians and the government and attempting to capture free media and the national broadcaster. In April 2020, the LPGU-led parliament was also responsible for initiating a political deadlock over the rotation of three Constitutional Court Justices, which lasted for over a year. The parliament persistently refused to replace the judges of Lithuania’s highest court by citing the candidates’ incompetence or delays due to the pandemic. However, many experts have suggested that the actual cause of the deadlock was an attempt by political parties to exert their power over the Constitutional Court and obtain judges favourable to their party’s agendas. The reputation of the Lithuanian courts has been rattled further by recent personal attacks made by the LPGU government against the Constitutional Court’s President, Dainius Žalimas, along with an unlawful dismissal of a Supreme Court judge. Therefore it is not surprising that Mr Skvernelis, during his meeting with Mateusz Morawiecki, proclaimed that “perhaps we haven’t done enough to de-sovietise our own justice system”, which seems to hint that Lithuania has a similar ideological stance to Poland and Hungary on issues relating to the rule of law.

Although the full impact of Brexit on Lithuania is still unclear, there is no doubt that it will bring change to Lithuania’s economy and demographic. Experts have forecast that there will be significant adverse effects on Lithuania’s economy in the long term due to the United Kingdom’s exit from the EU at the end of January 2020. The UK is Lithuania’s eighth-largest export partner, with furniture, fertiliser and building material the most popular exports. There were already logistical and financial setbacks for Lithuanian exporters at the beginning of 2021 due to extensive delays at UK customs. However, Brexit has brought about positive consequences for Lithuania’s economy also. Brexit has created opportunities for growth for Lithuania’s fintech sector. Companies such as Revolut and ConnectPay have chosen to set up in Lithuania instead of the UK to avail of its eurozone status and favourable regulatory conditions. Now, Lithuania has cultivated the fourth most powerful fintech sector in the world in the last few years. Brexit has also encouraged skilled Lithuanian workers to return to their home country amid new visa and residency requirements and a lack of job opportunities due to the pandemic in the UK.

Lithuania has sought to position itself as a regional leader, close to the core of Europe since its accession to the EU in 2004. Complete EU integration was a frequently cited priority for successive governments, with the country joining the Schengen area in 2007 and adopting the euro currency in 2015. Lithuania attempted to join the eurozone sooner, in 2007, but narrowly missed out due to inflation being 0.1 per cent above what the Maastricht criteria stipulated. Lithuania has sought to fully integrate into the EU with few opt-outs for two crucial reasons. First, Lithuania was eager to leave behind its Soviet and socialist past after declaring independence in 1990. Second, geopolitical protection from future Russian invasion was a major priority for a newly free Lithuania. Therefore, joining NATO, the EU and strengthening relations with the US was paramount.

Successive Lithuanian governments have prioritised the EU Baltic Sea region strategy and promoted equality of all EU member states. Lithuania’s current government has also sought to strengthen Lithuania’s relationship with core EU countries like France and Germany. This shows that Lithuania is actively trying to prevent the emergence of a ‘two-tier’ Europe by strategically remaining close to the strongest EU countries.

Lithuania has been a member of the Baltic Assembly since its inception in 1990. This regional organisation coordinates cooperation between the national parliaments of Estonia, Latvia, and Lithuania so a common position on international issues such as economics, education and culture can be obtained. Lithuania also maintains a strong relationship with Nordic countries as well as its Baltic neighbours. Lithuania is a key member of regional intra-governmental organisations such as the Council of the Baltic Sea States (CBSS) and the NB8 (Nordic-Baltic Eight), aiming to provide a forum for Baltic and Nordic countries to strengthen the Nordic-Baltic alliance. Lithuania is also a participant in the Three Seas Initiative, a cooperation forum of 12 EU member states situated between the Baltic, Black, and Adriatic Seas.

Even before the first case of Covid-19 was confirmed within Lithuania, the government declared a state of ‘extreme situation’ upon the advice of its experts. Ever since Lithuania has been in various levels of lockdown in response to waves of infection. The largest wave of infection was seen in autumn 2020 and gave rise to as many as 3,966 cases and 56 deaths daily. In response, the government imposed various restrictions on travel, work and life, and limited business activity to curb the spread of the disease and prevent their national health system from being overwhelmed. However, restrictions were eased at the start of summer 2021, with Prime Minister Ingrida Šimonytė optimistically stating that there might not be further restrictions due to the improving epidemiological situation.

Lithuania received approval from the EU Finance Minister for a recovery package worth €2.2 billion on 26th July 2021. This fund will be used to help rebuild Lithuania’s economy following the devastating effects of the pandemic.

4. Conference on the Future of Europe

The first domestic event as part of the Conference on the Future of Europe took place in November 2020 in Lithuania. It was organised by the Eastern Europe Studies Centre (EESC) and the Lithuanian Foreign Ministry. EESC hopes that the organisation of such events will demonstrate that Lithuania is interested in the future of the EU and has taken the initiative to bring the conference to life domestically. Lithuania’s President, Gitanas Nausėda, has also endorsed the importance of the Conference, stating that “the future of the EU should be based on the principles of a welfare state as well as fundamental values, development of research and innovation, implementation of the Green Deal” and that the Conference will help realise this vision. 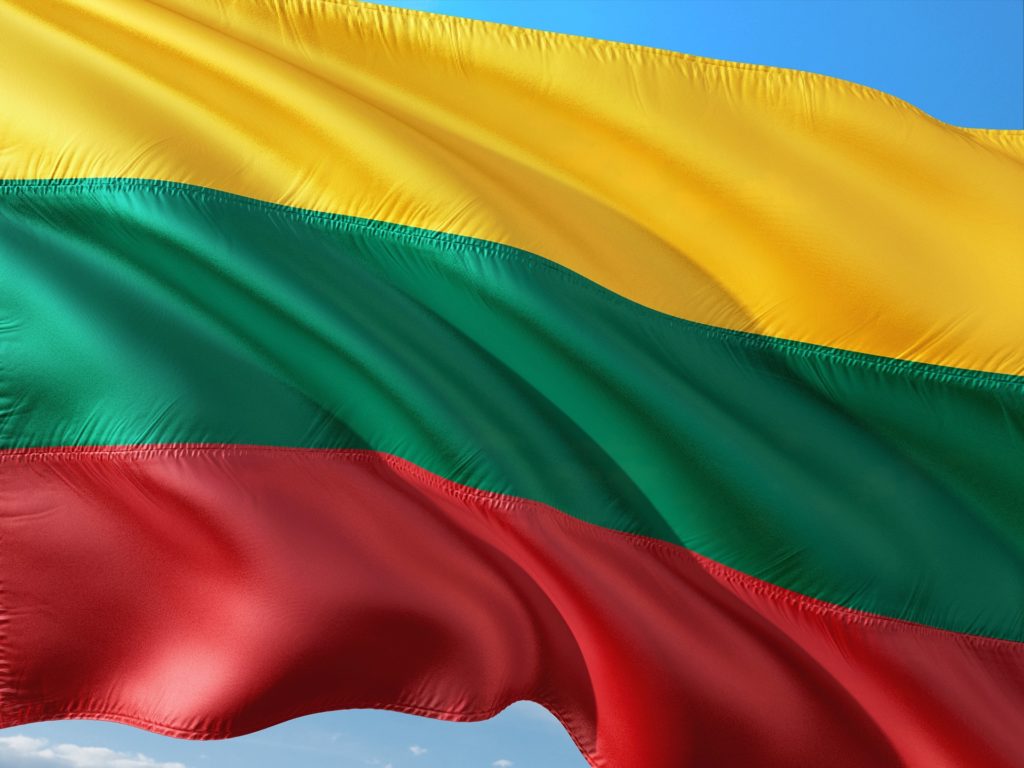