In the name of the separation of powers? The German Bundesverfassungsgericht and the end of the «PSPP-saga»

In the decision of 29 April 2021, the Second Senate of the German Federal Constitutional Court dismissed two applications for an order of execution lodged following the judgment of 5 May 2020 on the Public Sector Purchase Programme (PSPP) – i.e. the programme adopted by the European Central Bank (ECB) in the wake of the financial and economic crisis for the purchase of public securities on the secondary markets. With 2021’ judgement, the German Constitutional Court established that both applications are inadmissible and unfounded. For the Court, the applications are inadmissible because they exceed the procedurally legitimate scope of an order of execution under §35 of the Federal Constitutional Court Act (BVerfGG). Furthermore, they are unfounded, given that the German Federal Government and the Bundestag have appraised the European monetary policy decisions as the 2020’ decision ordered.

It is well known that 2020’ judgment of the BVerfG undermined the respect of the supranational legal order, and of the powers of its Court of Justice (CJEU). By this decision, the BVerfG held that the Federal Government had violated the applicants’ right to democratic self-determination by failing to take steps countering ECB’s failure to assess that the PSPP satisfied the principle of proportionality under Art. 5(1) second sentence and (4) of the European Union Treaty (TEU) – and, therefore, the principle of conferral. Before adopting such a decision, the German Court referred several questions to the CJEU. In the «Weiss» judgment, latter Court found that the ECB had acted within its mandate. However, the BVerfG harshly criticised the CJEU’s standard of proportionality review used in the case. That is why it obliged the German Constitutional organs first, to take suitable action against the PSPP (qualified as ultra vires act), and, second, to make the ECB conduct the necessary proportionality assessment on the same programme. Moreover, the German Court held that the Bundesbank would no longer be allowed to participate in the PSPP’s implementation unless the adoption, by the ECB Governing Council, of a new decision regarding the PSPP. On the same condition, the Bundesbank was called upon to ensure that the bonds already purchased under the programme (and held in the ECB’s portfolio) would be sold only if based on a strategy coordinated with the European System of Central Banks.

In June 2020, the ECB Governing Council adopted two decisions on the PSPP’s proportionality; later, the German Minister of Finance received several ECB related documents (some of which classified), made available for inspection by the Bundestag at the parliamentary Secret Records Office. In July 2020, a broad parliamentary majority declared that the ECB Governing Council’s proportionality assessment satisfied the requirements set forth in the 2020’ judgment.

In spite of these steps, the applicants contend that the ECB has yet to satisfy the 2020’ requirements. That is why they seek to compel the Federal Government and the Bundestag to demonstrate how they remedied the violation of the plaintiffs’ rights identified in the 2020’ judgement. Moreover, they also seek a declaration that the Bundestag and the German Federal Government remain obliged to take further measures to ensure that the ECB conducts and substantiates a proportionality assessment satisfying the requirements set forth in 2020. But there is even more: for the applicants the Federal Government must still ensure that the Bundesbank refrains from further participating in the execution of the PSPP.

In other words, the applicants believe that their fundamental right to democracy derived from Art. 38(1) first sentence of the Basic Law (Grundgesetz or GG), in conjunction with Art. 20(1) and (2) GG and Art. 79(3) GG, is still at stake.

By judgement of 29 April 2021, the BVerfG explains that an order of execution serves to give effect to the Court’s findings on the law, and to bring about compliance with the underlying decision on the merits. That is why such an order is permissible only within the limits set by the judgement’s operative part, and by the reasons on which the whole decision rests. Otherwise, an order of execution may modify and expand the original decision on the merits.

In the recent case, the applicants indirectly seek a declaration that the measures adopted by the Federal institutions violate constitutional law (i.e. the aforementioned Articles of the GG). For the BVerfG, such request needs a new constitutional review of the recalled German institutions’ acts, including an assessment of any new legal circumstance arisen after the original decision. For the German Court, this same approach holds true also regarding the request to gain access to the ECB documents shared with the Constitutional institutions.

In this light, the BVerfG clearly states that the Federal Government and the Bundestag took action to ensure the ECB’s proportionality assessment satisfying the requirements set forth in the 2020’ judgement. Moreover, the Court declares that the measures taken by both organs are not manifestly inadequate or completely insufficient to meet the decision’s obligations. In this respect, the BVerfG emphasisis the importance of both Constitutional institutions’ margin of appreciation, assessment and manoeuvre.

For the BVerfG, in principle Constitutional organs decide autonomously how to remedy a violation of rights objected to by the Court itself. In this respect, as said, the German Federal Government and Parliament have a broad margin of appreciation and assessment. Constitutional organs would exceed such a margin only in three cases: if no action were taken at all, if legislative (and/or other) measures taken were evidently unsuitable or inadequate, or if they fell significantly short of achieving the aim of the protection. For the BVerfG, the applicants did not demonstrate that the Federal institutions’ measures fell significantly short of these three requirements.

In this light, for the first time since roughly ten years, the BVerfG seems to understand that a different decision could represent another dangerous precedent for the separation of powers in Germany. It is well known that, even nowadays, checks and balances make sure that the three powers interact in an equitable and balanced way: furthermore, separation of powers is an essential element of the rule of law, as enshrined in contemporary democratic constitutions, and the supranational Treaties.

Since 2011, the BVerfG has often given the impression of forgetting such a principle – rectius, of forgetting that political decisions may be challenged only by elections, not in front of courts. With the recent decision, the German Constitutional Court did not simply end the «PSPP-saga»: it somehow safeguarded the very foundations of democracy. But, given that the judgement of 15 april 2021 opened the «Recovery and Resilience Facility-saga», only time will tell us if the BVerfG will stick to such a significant achievement.

As a matter of fact, by rejecting an application for preliminary injuction against the Federal statute-law ratifying the «EU Own Resources Decision», latter judgment allowed the President of the German Federal Republic to sign that same act (necessary for the entry into force of the related «Next Generation EU-plan» – NGEU). However, on the other hand, the BVerfG stated that the constitutional complaints lodged against the Federal act of approval, in the same principal proceeding, were neither inadmissible nor clearly unfounded. Therefore, in few years (and certainly after a CJEU’s preliminary ruling), the German Court will have to deal again with the new EU Commission’s borrow capacity (related to the NGEU), wondering if it exceeds the TFUE legal basis – and, as consequence, fundamental rights of the German complainants. Therefore, even if the decision in the preliminary injunction was not in favour of the applicants, it is possible (even if not likely) that the Second Senate, in the principal proceeding, will find a violation of Art. 79(3) GG.

Such a decision, in future, may have serious consequences: the German Federal Government and Parliament may have to act in order to restore the constitutional violation – i.e., the Federal Constitutional organs should ask for a modification of the EU’s Treaties or, if such an aim is impossible, leave the Union.

Once again, all Europe will have to wait in order to discover if the BVerfG only barks, but, in the end, does not bite.

Monica Bonini is Associate Professor at the University of Milano-Bicocca. 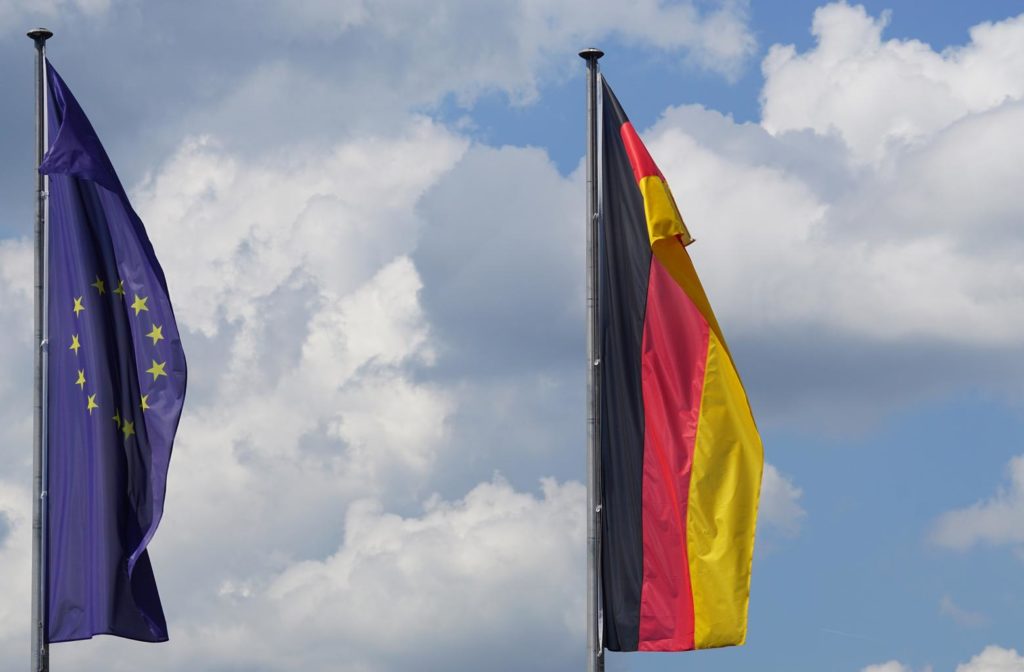