On 16th of September 2020, Commission President Ursula Von der Leyen gave her first State of the Union (SoU) address, a practice that began in 2010. The annual address is evidence of the growing presidentialisation of the Commission following the ratification of the Lisbon Treaty. The Commission President now exercises a stronger leadership and agenda-setting role within the College than was formally the case in the past.

For the first time, a woman delivered the SoU and the tone reflected this.  Commissioner Von der Leyen speech had a personal touch: she referred in particular to young people, notably Suadd, a teenager refugee who arrived in Dublin and within three years was awarded a prestigious scholarship to study medicine and Carola and Vittoria who played tennis between the rooftops in Italy during the COVID lockdown.

The emphasis in the speech was on both Europe and the wider international system. The words Europe, European, Union and EU were the most frequently used words followed by references to the world and global. This underlines the centrality of Europe’s neighbourhood and developments in the global system to the Union’s future. Fragility was the dominant framing of the current state of the Union and the world; planetary fragility, fragility of our community of values and fragility of the wider world. Her political pitch was for ‘Europe to lead the way from this fragility towards a new vitality’ and the need to focus on ‘building the world we want to live in’.

Inevitability the Covid crisis-both Europe’s performance during the pandemic and recovery from Covid -was the predominant theme. She sought to defend the Union’s response to the crisis but more importantly focused on the future. In a rare mention of the ‘Conference on the Future of Europe’ she called for a European Health Union and acknowledged that this implied additional EU competencies in health, which opens up the question of treaty change. The key headline policies were NextGenerationEU and the European Green Deal. There was nothing new because the target of 55% reduction in emissions by 2030 had been well flagged.

On the world beyond Europe, she reiterated the EU commitment to the global multilateral system, albeit a reformed order.  On relations with global powers, China was defined as ‘a negotiating partner, an economic competitor and a systemic rival’, which all points to the EU’s determination to rebalance this vital relationship. Nor did President Von der Leyen shy away from raising human rights abuses in Hong Kong and the Uyghurs minority in China. Then she turned to the Union’s neighbours-Russia, Turkey and the UK. All three are large states on the EU’s border and relations with all three are very problematic and challenging. Improved relations with Russia were ruled out because of its role in the neighbourhood, election interference and the poisoning of Alexei Navalny.

Concerning Turkey, the Commission President concluded that there is a growing distance between Turkey and the Union and that attempts by Turkey to intimidate its neighbours were unjustified. President Von der Leyen reserved her toughest rebuke for the UK because of its intended introduction of a bill that breaks the Withdrawal Agreement that only came into force on February 1. She signalled to London that the WA ‘cannot be unilaterally changed, disregarded or dis-applied. This a matter of law, trust and good faith’.

Finally, the President referred to the introduction next week by the Commission of a New Pact on Migration, one of the most contentious issues on the EU agenda but one that requires a European response following the fire at the Moria camp in Greece. President von der Leyen found herself facing a major crisis within months of taking office: her SoU in 2021 will tell us if progress has been made on the big ticket items identified in this speech.

Brigid Laffan is Director and Professor at the Robert Schuman Centre for Advanced Studies at the European University Institute (EUI), Florence 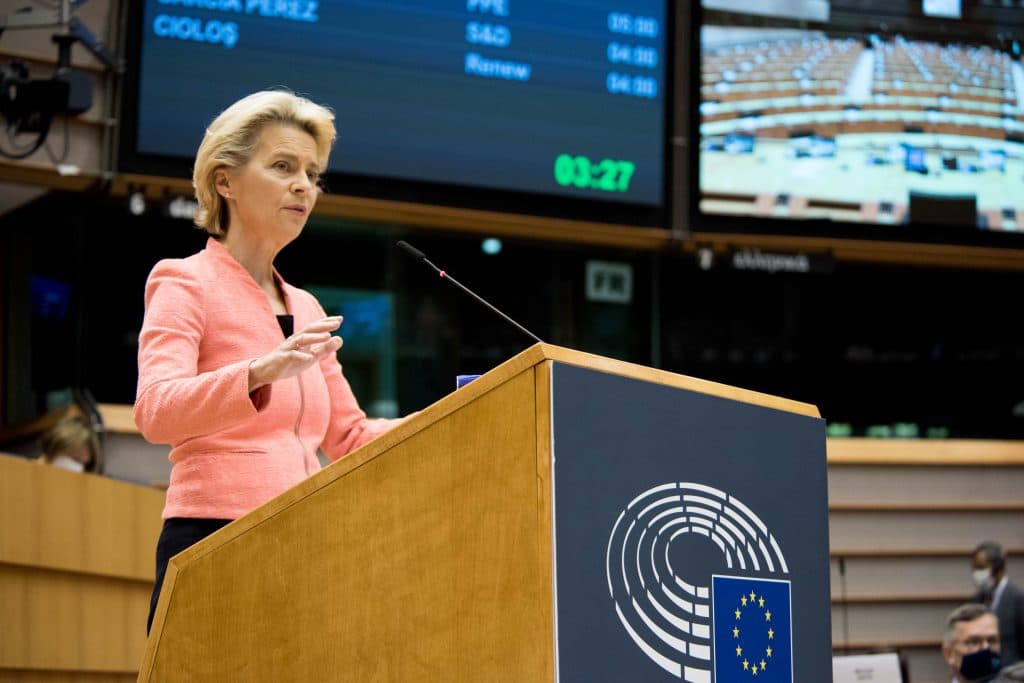