A Blend of Ambition and Compromise: The Commission’s Proposal for an EU Climate Law

On 4 March 2020, the European Commission published its Proposal for a European Climate Law (“Proposal”) as one of the first actions in the framework of the European Green Deal.

The idea gained public attention with the pledge by the newly appointed President von der Leyen that the European Union will become climate-neutral by 2050, which means achieving net-zero greenhouse gas emissions (for EU countries as a whole).

The result is a framework regulation – based on Article 192(1) TFEU – which enshrines into law the climate-neutrality target, provides a framework to advancing progress in adaptation to climate change, and sets up a timeline to achieve those objectives. Thus, it lays down steps for the action of EU institutions and Member States and a system to review any progress thereunder and adjust the “trajectory”.

The Proposal has a dual objective: a) reducing greenhouse gases (GHG) emissions to net-zero by 2050 (Article 2), and b) ensuring progress in achieving climate change adaptation (Article 4).

a. The Temperature Goal

The Commission may adopt delegated acts aiming at setting out a 2030-2050 EU trajectory to achieve climate neutrality (Article 9), and a timeline is set out to achieve this objective.

By September 2020, the Commission is required to review the Union’s current 2030 targets for energy and climate (set at 40 % domestic GHG emission reduction as compared to 1990) and to “explore options” for a new target of 50 to 55 % GHG emissions reduction.

b. The Climate Change Adaptation Goal

In pursuing the global climate adaptation goal set under Article 7 of the Paris Agreement, the Proposal requires Member States to develop and implement adaptation and risk management strategies.

Subsequently, the Commission will review progress every 5 years and may issue recommendations to Member States whose measures are found to be inconsistent with the climate-neutrality objective or inadequate to advance climate change adaptation (Article 6). Member States should report how those recommendations are addressed (or why they are not).

A few remarks come to mind. First, “exploring options” to review the current 50 to 55 % GHG emissions reduction target does not sound like a compelling obligation. Only if an amendment of the target is considered “necessary” (read: feasible?), the Commission is required to propose amending the 2030 target.

Whilst the Proposal does not impose additional reporting streams on the Member States, it imposes review and assessment obligations on the Commission, topped only by the power to issue non-binding recommendations. Is this the best and most efficient way of setting up an enabling framework for climate action, as asked for by the European Council? In the end, is such a regulation – at least in its current form – actually necessary to improve the existing climate framework?

Moreover, the Proposal does not impose obligations on individuals, but only on EU institutions, Member States and the European Environmental Agency (Article 7(2)). This means that, in practice, the existing regulatory landscape does not change for individuals or companies. To be seen how the Proposal – if adopted – will interplay with the forthcoming EU taxonomy legislation on sustainable financing.

One may also wonder if the Proposal actually enables improved scrutiny of the EU institutions over Member States’ measures, or if it incentivises Member States to improve timely compliance with the steps (and the trajectory) under the Proposal.

Furthermore, the Proposal is silent on climate-change litigation matters, including access to justice by individuals and non-governmental organisations. This appears to leave Urgenda-type of cases out of the courtrooms of Luxembourg (save potential references for a preliminary ruling).

Besides the ambitious new 2050 climate-neutrality target, the Proposal does not present novel or revolutionary elements that would ensure achieving this objective. Is it possible that, after all, novelty and innovation on climate law were not sought by this Proposal? Or is this perhaps simply the product of careful calculations aiming at a smooth result in the next steps of the legislative process?

The nature of the Proposal suggests that it has been put forward primarily to support an EU leadership on climate ahead of the 2020 United Nations Climate Change Conference in Glasgow. Besides the focus on measure planning and implementation, can the Proposal deliver on its two objectives?

The Climate Law is only a piece of the European Green Deal, compiled in record time by the Commission. Although it may not be as ambitious or original as some expected, it is likely that the European Parliament and the Council will take their chance to weigh in.

This blog was originally published on the Brexit Institute Blog

Filippo Mattioli is a lawyer practising EU environmental and regulatory law at Steptoe and Johnson LLP, and a member of the IUCN World Commission on Environmental Law. He writes this post in his personal capacity.

Photo credit: Council of the EU, Greta Thunberg, climate activist, at the Environment Council in March 2020 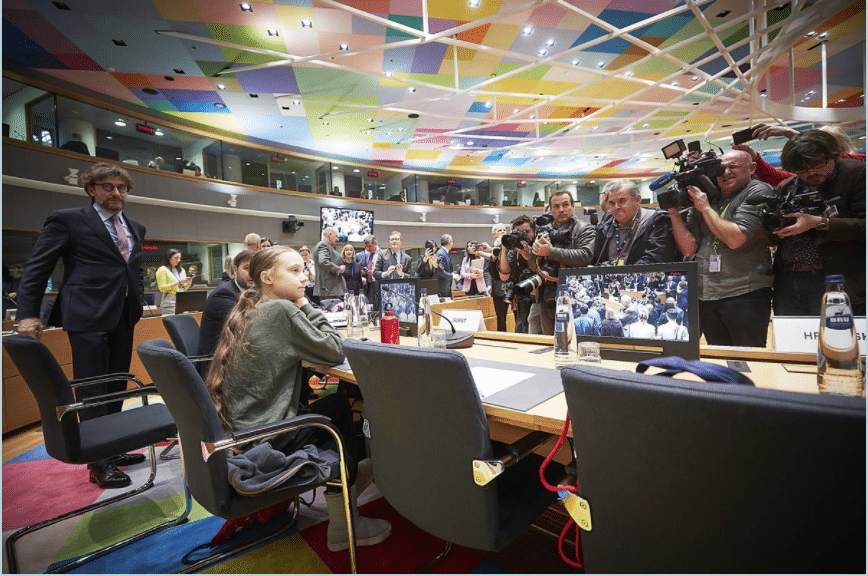