The facade-stability of the EU-Turkey agreement

In March 2016, EU and Turkey committed to the implementation of a joint action plan, activated in the wake of the 2015 crisis: an agreement that introduced temporary measures to contain and regulate the migration flow into Europe[1]. The deal has long been criticized, both in respect to the human rights standards by appointing Turkey as “safe third country”, but also for its binding yet controversial legal breadth[2]. Four years later, the “temporary” agreement, still in force, has exhausted its containment power and now the accumulated, inescapable responsibilities of the EU, so far avoided, are laid bare[3].

The triggering event may be attributed to the European dismissal of the Turkish request for support at the emergency NATO meeting (27th of February) regarding the latest Idlib airstrike. Consequently, President Erdogan defiantly declared the borders “open” to Greece: thousands of migrants were directed to the northeastern Greek border of Evros and to the islands and used as a bargaining chip for extorting support on the Turkish claims.

The Greek government tweeted a firm response: “No one can cross the Greek borders. All those attempting illegal entry will be effectively prevented. The present situation is an active, serious and asymmetrical threat to the national security”. Police and military forces were displayed at the borders followed by executive orders to counteract against what Greece has called “a hybrid war”. The former consisting in the immediate and unprecedent suspension of the asylum applications, the authorization to proceed to undifferentiated push backs without previous registration, and orders to arrest and detain, for up to 4 years, the trespassers on Greek territory.

At the Greek-Turkish borders a real humanitarian emergency is unfolding right in front of our eyes, while reciprocal governmental accusations and denials of brutalities are exchanged. Amateur videos capture teargas thrown against immigrants, shootings and push backs of boats arriving to the islands. Bulletins refer to a drowned child and to a young Syrian allegedly shot dead at the Greek territory of Kastanies. Footage and testimonies show further violence against volunteers of NGO’s, against journalists and even against representatives of the UNHCR in Greece. In the meanwhile, on the ideological battleground on the social media, conspiracy theories are breeding.

The crisis of the EU-Turkey agreement may represent a turning point for European politics and likewise become a stepping-stone for the future external relationships of the EU. Europe’s response to this emergency is therefore loaded with extraordinary political weight.

The financial arrangement with Turkey has proven an efficient temporary strategy for at least two fundamental reasons: not only did it help stem Europe’s biggest refugee wave since World War II, but it also prevented spreading of populism that had long-lasting consequences, e.g. Brexit. Yet, the breakdown of the agreement with Turkey represents a perfect opportunity for European anti-immigration, nationalist or populist leaders to boost their political support. However, there is no space left for doubt: this agreement did not address the immigration crisis, it has only allowed the temporary concealment of an ongoing emergency from public eyes and procrastination in relation to the related responsibilities. The political limits and the physical borders of Europe would be severely tested in case the last migration crisis were repeated, with an increasing number of refugees gathering anew on its doorstep.

The renegotiation of the agreement represents additional challenges for Europe. This seems to be the moment to take a decisive political stance but also to test and validate concrete alternative solutions from the lessons learned from the 2015 crisis. It is the right occasion to demonstrate political unanimity and to adopt coordinated strategies to neutralize the Turkish demands without escalating the diplomatic debate. Furthermore, the manipulation of vulnerable people from the Turkish side shows the hollowness of the humanitarian rhetoric coming from European institutions.

“Our priority in Greece is to maintain order at the EU’s external borders”, said Ursula von der Leyen in a statement reflecting the European priorities for the 2020 migration crisis. Europe announced supplementary financial support to upgrade the border infrastructures, and Frontex was scrambling to create “a rapid border intervention” squad to ease the burden on Greece, now proclaimed “the shield” of Europe.

The European response comes in unison: migrants, refugees or not, are prevented from crossing the borders of “fortress Europe”. The preservation of security at European borders expresses the shared political resolution and meets all ends.

Europe’s alternatives to this securitarian approach are sinking together with the right to asylum, the right to human dignity, as a result of the Union’s fatally fragmented solidarity strategy. Turkey has forced Europe to publicly “confess” its humanitarian hypocrisy. Not only in front of the unanimous and reiterated reports on the inhumane and overcrowded accommodations that are hosting immigrants very far from Brussels, but also in the face of this humanitarian emergency, Europe chooses to barricade behind the fence.  Erdogan’s cynical affront has exposed the EU’s political fragility and brought into the forefront its longstanding political fragmentation.

And yet, this European challenge could have escaped a securitization tactic.

The collapse of the 2016 agreement can be considered neither unexpected nor unreasoned. Turkey has been hosting approximately 3,6 million refugees just a few kilometers away from the European borders. Erdogan didn’t exactly contribute to solving the current humanitarian crisis but neither did he create it autonomously.

Since 2015, Europe could have benefit from various combined strategies, if the issue was tackled properly and the solutions systematically coordinated and implemented: attempts to reduce irregular flows (with the launch of the Trust Fund for Africa and the reinforcement of returns), could combine with concrete proposals to enhance the regular channels of entry. Furthermore, proposals to reconsider the Dublin Regulation and redistribute responsibilities could go alongside efforts to establish and implement a different management of the right to asylum. These options would however have required major political will that Europe, consciously or not, has failed to muster. The “coup de grace” inflicted on the solidity of the EU-Turkey agreement may appear particularly controversial if seen only from a humanitarian approach. Yet the rapid developments confirm that Europe still has numerous options.

On the 9th of March Ursula von der Layer and Erdogan met in Bruxelles to negotiate the possibility of a “workable agreement[4]. At the end of the meeting they decided to consider the 2016 agreement still valid, providing that it must be closely reviewed by experts: their task is to find a common ground on which the reciprocal responsibilities meet, and claims are properly addressed. Specifically, Erdogan complained about a missing European economic transaction based on the 2016 agreement, and asked for additional financial support (up to 40 bn) to equal the hospitality expenses of the refugees and more solidarity with the Turkish military operations in Syria. He also insisted on the facilitation of his citizens when moving in Europe and insisted on the prioritization of the visa-free travel for Turks. The European side, first declaring their financial obligations under the agreement disbursed regularly to this stage, then backed Greeks openly, against the protests of Erdogan, for effectively protecting the external EU borders. No clarity has been made on the new economic claims of Turkey, but it was sharply pointed out that “finding a solution to this situation will require relieving the pressure that is put on the border”. In the meanwhile, five European member states offered to take between 1,000 and 1,500 unaccompanied children living in dire conditions. This should be considered a temporary solution for an issue that requires a larger process and a systematic solution, as Von der Leyen said.

Europe represents a considerable geopolitical force, but it is still missing a common foreign policy and a proper external diplomatic unit capable of dealing with international relations and politics, global crises and alliances. In addition, it does not have a proper military force for its defense. This will inevitably entail further complications in managing the current geopolitical context and developments.

[2] UNHCR, Legal considerations on the return of asylum-seekers and refugees from Greece to Turkey as part of the EU-Turkey Cooperation in Tackling the Migration Crisis under the safe third country and first country of asylum concept, 2016; European Database for Asylum Law, A critical approach of the concept of Turkey as a safe-third country under the scope of the EU-Turkey “Common Statement” as interpreted by the Greek Council of State and two different Independent Appeal Committees, 2018. 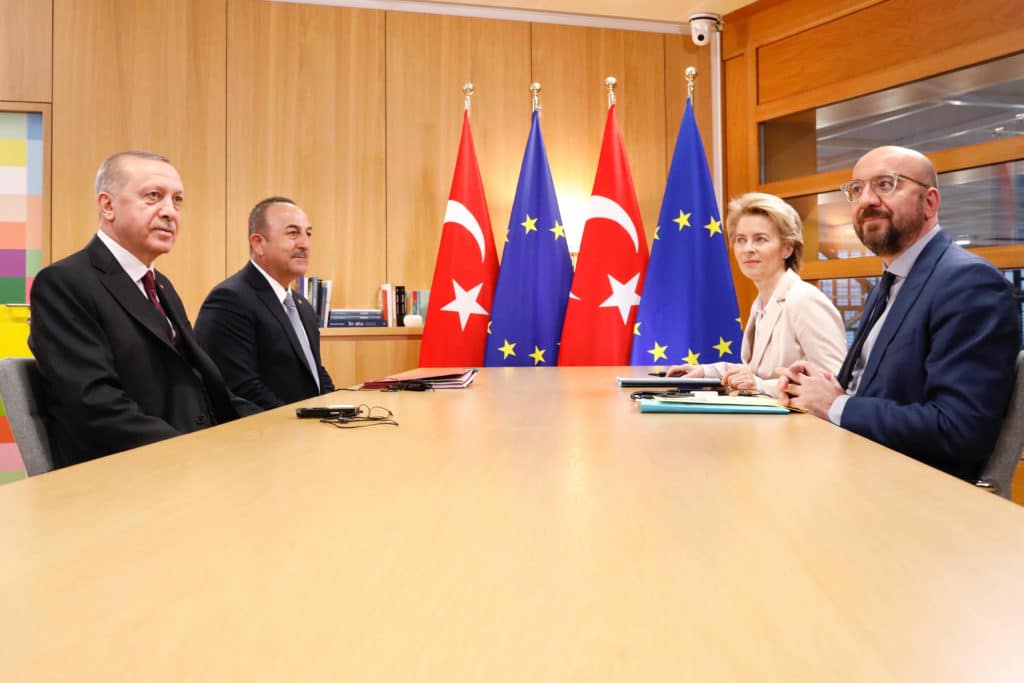